I am proposing for this vile tyrant to be given the Pure Evil label and here’s why:

Henious Standards: Ghetsis is arguably one of the most evil villains in the entire Pokémon franchise (or even THE most evil) and has done way more evil acts than the average bad guy. Unlike most other villains who have a soft spot for Pokémon, Ghetsis has no feelings for them and only sees them as slaves, this is especially shown when his Hydreigon uses Frustration, a move that gets more powerful the more the Pokémon hates it’s trainer. Many of the other villains have at started off having good intentions became so obsessed they became corrupted, Ghetsis had pureky evil intentions right from the get go. He’s so evil even his own goons sometimes tries to settle him down before he does something terrible.

*For the entire of Pokémon Black and White he has been tricking N into ‘liberating Pokémon from their owners’ when all the time he was just using him so that he could have full control on Unova and have all people and Pokémon do his bidding.

*In Black and White 2 he uses Kyurem to freeze an entire town (and plans to freeze the rest of Unova), when the protagonist confronts him he attemps to kill him/her with Kyurem but is saved my N, He kidnapps N’s Reshiram/Zekrom and fuses him with Kyurem, after defeating Ghetsis, he throws a fit of rage and when N tries to settle things with him, hspe tells him to shut up, that he’s right and everybody else has no value but to be used, even the Shadow Triad teleport him away.

Moral Agency: Ghetsis is a greedy, selfish wanna be dictator who will do about anything to control the entire region of Unova and has no problem hurting or even killing anyone that tries to stop him. For a usually bright, colorful, kid-friendly series like Pokémon, Ghetsis is a diabolical monster.

No Redeeming Qualities: Ghetsis never shows any remorse for his evil actions, has never done or tries to do anything good, he dosen’t care about anybody exept himself, Ghetsis does not have any positive motive for his actions, in his view only evil exists.

No Sympathy: Through terrorizing innocent people, manipulating people into thinking he’s trying to save the Pokémon when he is not, or trying to kill a child he never shiws any hint of regret or sorrow.

That’s all I have to say. What would be your opinion on Ghetsis? If you have anything to add please do. 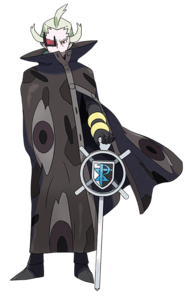 I totally agree, being a huge pokemon fan (and playing every game) I have to say that yes Ghetsis should be pure evil