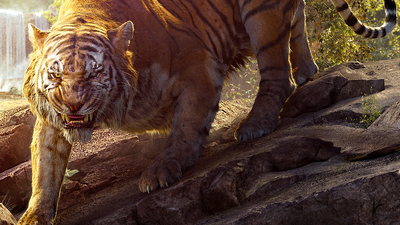 NOTE: This article is about the incarnation of Shere Khan from the 2016 movie. The mainstream version can be found here: Shere Khan (Disney). Shere Khan is the main antagonist of the 2016 Disney live action film The Jungle Book, a remake of the 1967 animated classic. He is a notorious, fearsome...

After reading the actual Rudyard Kipling's The Jungle Book and watched both the 2016 version and 2018 version of Shere Khan, I haven't noticed that at first but I now see that these versions of Shere Khan are symbolic than the original disney version.

Many versions of Shere Khan often portray as an aristocratic, sophisticated character. He also often portrays as a figure of authority. I believe that they are somewhat similar to people who are figures of authority such as some government officials or some people who are part of high society that break laws and use the law against certain people to achieve their goals.

Although, Shere Khan's original disney versions seem more justified as he is a primary target for poachers or trophy hunters. Bagheera simply says, "He hates man with a vengeance, you know that. Because he fears man's guns and man's fire". Which could mean that he has a very traumatic experience with humans involving guns and fire. But like some versions, he often keeps a stiff upper-lip, not showing much emotion.

I also see that the 2018 version of Shere Khan seems more psychologically damaged than the 2016 version, as he sometimes have changes in his voice and put emphasis on the term "man". In the end, Mowgli says, "Sleep now, Shere Khan. Be angry no more". Which could imply mowgli's sympathy to put an end to Shere Khan's unhealthy obsession to destroy him and how it has cause serious harm to everyone around him and his jungle home.

If you have any comments or questions, feel free to do so.

I don't know why some people

on this wiki is obsessed with making Shere Khan Pure evil.

Why is the 2016 version of Shere Khan considered "Pure Evil"?