And let's be real here; none of any PE villains are anywhere Tragic. And even IF they had horrible pasts, THEY ARE FAR PAST IT.

A reply to Your Not So Average Guy
0

@10,000 Volt Ghost You do realize that Lotso left Woody and his friends to perish in the incinerator room, right? Plus he didn't cared about anyone, not even his own henchmen.

If you wanna make a blog about it, I say, go for it!

This thread strongly focuses on Pure Evil Villains who are surprisingly attractive, even if looks can kill at often times. And yet, we just appreciate them solely based on both their appearances alone.

Now, I must also note that we all have our opinions regarding these types of villains and the Dark Ones (or admins/moderators) can enforce this if things were to get out of hand. And yes, there's also non-PE villains to appreciate, but this blog is strongly focused on the Pure Evil ones as they stand out from other, regular villains.

Galia (from Parallel Paradise): Even from all the reprehensible actions she committed, you can't help but just gander at her amazing looks, especially with her innocent (yet facade) nature in her jester costume. Furthermore, she is a prime example of a femme fatale yet still be quite an attractive woman, assuming she doesn't shift into her monstrous form, or as a bloodthirsty witch. If looks could kill, at least there won't be any regrets afterwards.

Herrscher of the Void (from Honkai Impact 3rd): A perfect example of a villain whose crimes are so atrocious and is yet widely popular based on her killer yet beautiful looks, especially if she's gotten a huge praise by others in the Honkai Impact 3rd franchise despite her massive body count to show. Hate her or love her, she's basically a deadly yet wonderful sight to behold.

Dio Brando (from JoJo's Bizarre Adventure): To me, he's essentially a chick magnet beyond his long list of crimes, especially with those jacked-up muscles to go for that makes regular bodybuilders jealous. And he is also equally famous for his quote "ZA WARUDO!", especially in terms of memes (JoJo's Bizarre Adventure is famous for their variety of memes, not just Dio). All in all, he's quite the looker, even if he's out for blood.

Avon Hertz because inciting a global nuclear war and mass genocide shows that he only wishes acceptance and is purely innocent altogether.

Yeah. I could create him, though I don't want to overwork myself too much.

Added new villain from Boyz n the Hood, in case anyone is wondering. You're welcome to help improve it, especially by adding pictures. Enjoy! Here's the link:

(On a side note, I have another villain in mind to create, though I'll have to rewatch Aladdin.)

So who's Three Finger? Well, he's a mutated cannibal from the Wrong Turn franchise (including prequels) and eats and even kills any human (and animal, if available) on sight, especially if they were unlucky enough to set foot in an isolated, forested area of Virginia. He wouldn't eat his own fellow mutants, but even that doesn't stop his bloodthirsty intentions from killing and eating humans. Also, he's almost virtually invincible, being able to survive just about anything, really (up until his official death in Wrong Turn 3). That shows that he wasn't just a deformed human, he was a near-unstoppable monster beyond belief.

To start off, Three Finger shows absolutely NO sympathy whatsoever. Even if his son, Three Toes, and his friends, were to be killed, it'll only drive him to sheer insanity, and it'll make him seek and kill humans even more, and relentlessly tracks them down without ever stopping no matter what. And if he were to see human children, don't count on him feeling sorry for them, he sees them as food, simple as that. And he obviously shows no regard at all.

Three Finger knows what's right and wrong, he simply doesn't care; he considers hunting and killing humans (and animals as well, if available) as his own personal leisure and even if he doesn't speak, he's borderline crazy enough to just brutally murder them and eat their corpses because why not. Those who get themselves lost in the forest are almost guaranteed to be killed in the most brutal fashion at the hands of Three Finger himself, and his clan as well. And his moral agency is made clear as well, hence why he hunts down humans and just kills and/or kidnaps them in the most brutal, gory fashion there is.

And Three Finger is nowhere being intimidated easily either, which was shown in Wrong Turn 3: Left for Dead.

While he's obviously a mutated cannibal, even if he WAS human before, he'd still resort to hunting down humans, even killing, torturing, and eating them, dead or alive. Sure he doesn't just abduct humans and eat them right away, he'll do the same to animals as well (if any, considering there are none). And with many abandoned cars that were found, some even had bloodstains all over them, which obviously indicates that the drivers and passengers became victims at the hands of Three Finger and his clan.

Of course, he wouldn't simply abduct humans if in a public place, which shows signs of intellect and was shown to be following orders by Maynard from Wrong Turn 5: Bloodlines; nevertheless, he takes serious gratification in abducting and eating humans, not just torturing them, if given the chance. And he'll go as far as to eat children alive as well.

Again, Three Finger is a cannibal, and a brutal, sadistic kind as well and has absolutely no redeemable qualities to show for. In the end, he's a monster who views humans as food and kills them in the most gruesome fashion ever, even torturing them while eating them alive. Even if he wasn't mutated, he'd still commit heinous crimes there is, and gets away with it very easily. And he's impossible to be intimidated and just laughs it off like a sadistic bastard he is (pardon for the swearing).

All in all, I really think Three Finger should be considered PE as such, as he has a clear moral agency, even if he was following orders in the prequels. Before you ask, yes, Three Finger can't be killed, though he's by no means invincible, as he's shown to be killed in Wrong Turn 3, but not before giving Nate a twisted, sadistic grin. 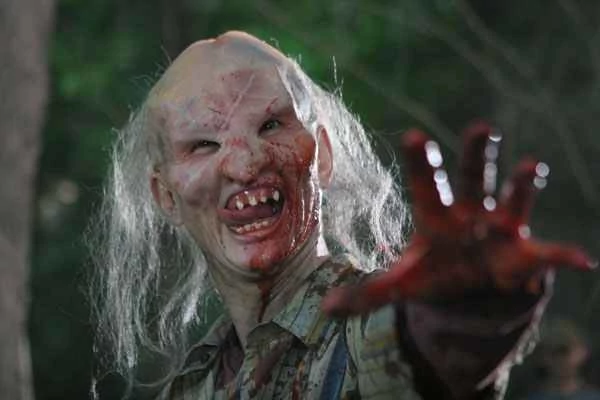 We'd get more people in, but because Wafner's acts are so obvious, it's clear enough that even the people who haven't commented yet knows that Wafner's of Pure Evil material.

Wafner is a Nazi soldier seeking to kill and even use captured soldiers and villagers in a secret compound that housed a lab with a sinister twist, and that's performing heinous experiments on them.

His intentions were to put it simply, abduct villagers (children included) and soldiers (mainly the US soldiers and maybe even kill them, whichever works best for these Nazi soldiers) and use them as live test subjects, which leads to grotesque mutations that makes them far less human. In other words, their intentions were to use the serums and turn them into super-soldiers, regardless of the consequences.

And Wafner here knows what's right and wrong, and chooses the latter in the end, because he sees other humans (mainly the villagers) as living lab rats, or shooting galleries. He's a Nazi after all, do you expect to feel sorry for him and his soldiers? Absolutely not.

None whatsoever to show. His voice is cold, his appearance is something to be feared of (whether he's been mutated or not), and he takes extreme joy in just playing mind games against his opponents (he's been shown to be beaten to a near pulp and still laughs at this in a spine-shivering manner).

As for Wafner himself, he's cold, ruthless and, to put an extent, a living nightmare, and is quite the rapist as well when he tried to rape Chloe, and shows no empathy either, as evident when he kidnapped Chloe's brother Paul for an experiment.

Not only that, he looks human at first, because he really IS human, but after a scuffle, a shot through the face shows what a true monster he really is with that disfigured face of his, especially after injecting two test serums into himself, which not only drives him mad, but soon turns into something to become truly terrified than the Bogeyman himself, completely devoid of normal emotions even. It just puts other horror characters with disfigured appearances like Freddy Krueger to shame (at least in my opinion).

Wafner has no supernatural powers, but with the serums injected in him, he becomes near invincible. He's been shot and impaled directly through his chest and STILL puts up a fight. Even shooting him in the head won't do anything except drive his murderous bloodlust over the edge to the point when he's more monster than human.

Simple, really. Abduction (along with inhumane experimentation, even though his fellow scientist did all that (forgot the name)), attempted rape and murder. He's a Nazi, after all.

Again, he's a Nazi, so therefore, he shows absolutely NO empathy to his victims and his opponents. This was also evidenced when he injected the serum in him, which completely eliminates any kind of sympathy in him, replaced with a true desire to kill, maybe even more abduction if he feels like it.

Wafner's evil intentions are akin to Red Skull, who is also Purely Evil and a Nazi as well, and because of his obviously evil actions, it's quite clear enough that he's fit to be Purely Evil, though that's entirely up to you people on whether he's truly fit into the Pure Evil category or not.

And Wafner's face says it all:

(edited by JonTheVGNerd)
A reply to Red Chevalier
0

I see. Then feel free to delete my previous post then. Still undecided as such, because I don't want to just say yes in order to break the tie. Only the others are free to decide.

A reply to Red Chevalier
0

I've seen the movie before, and judging the way he acts, he destroys plants and people for his sadistic entertainment. Even if he'd be amoral at first glance, him still destroying the galaxy as a whole proves that he has no remorse, friend and foe alike, and he puts other PE villains in the DB universe to shame (particularly Frieza and Cell).

Although as the other poster said, best to wait until the movie's out. My final decision will be on hold (or undecided for now, if you will) until further notice.