all else aside, in Korean general mindset is that descendants must pay for ancestor/parents' offenses. But even with that culture, what Bok-Il did to sickly San Kang is considered in Korea to be inhuman and absolutely unacceptable. Korea has not executed a criminal in a long time. But in case of Bok-Il he will get one swiftly.

I'll just leave it to others' judgment. But I am not holding too many hopes at this point.

all right. If this tendency of dragging everyone around him to horrible perdition with him is not enough to be PE I am not sure what qualifies to be one.

I can only hope someone who has better language skills than I am agrees with me...

one doesn't always have to cause genocide-scale damage to be PE, right?

I, a newbie, was told that I must discuss his worthiness as PE and get approval.

what did he do to be PE? He meets basic standards of 5 conditions of PE depicted in Villains Wiki.

1. Bok-Il claims he loved a woman named Ha-Young, but as revealed in the story his claim is not love, but obsession and possessiveness. These obsession ended up killing his former love.

2. When Bok-Il enters the story, the story suddenly shifted from comical school slice of life to thriller drama and tragedy (during flashback arc). Also as an obsessed man he persistently seeks to wreck a sick child (whose sickness Bok-Il is responsible of) of the woman he once loved and ultimately responsible for her death before deciding to kill him (though failed), using the sick child as a leverage to destroy his former employer's life whose life he already damaged. Also Bok-Il had been harassing Kang family for years and years, ultimately resulting the destruction of San Kang's family in addition of killing the woman he once claimed to have loved. But even this was not enough for Bok-Il. He extends his demented obsession over to ailing child San. (moral event horizon issue, heinousness of atrocity level, causing revulsion to readers, being taken seriously) Wee see why Kang family was afraid to call police. As for Gwon, his father lent the money from Bok-Il and Bok-Il, to leech even more interests out of him, purposely made things difficult for Mr. Ha to pay loans on time even when the old man was paying loans on time despite his difficult physical conditions. At the climax of the story after Bok-Il's rampage an entire chapter (82) had both San and Gwon, both victims of Bok-Il's heinous crimes, fighting for their lives.

3. Not represented represented in a positive way: his intelligence is his only positive aspect, but he did not use it in a constructive manner and even that aspect is immediately overshadowed by his brutal and thuggish nature. Also he showed absolutely no regret or remorse to his own actions: in fact, he decides to "go all the way."

4. level of threat - Bok-Il obviously caused very serious problems to Gwon and San so needless to say he is formidable. Bok-Il's psychotic nature was also baneful to his own lackeys as well. 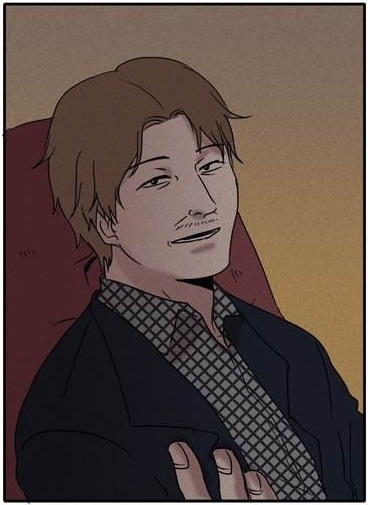