If you personally find him funny.

I find him funny at times. In a dark way.

Most incarnations of the Joker are PE, no doubt. But writers have made Joker a murdering , who makes readers and watchers laugh. I'm not kidding, the Joker has also been used to add bits of comedy to DC stories. In The Killing Joke, for the first and last time, he made Batman laughn (in a non lethal joker venom way), and in stories with him involved, he cracks unexpected Jokes that make fans laugh out loud. So, is the Joker an exception to the no comedic element rule for PE characters?

Hmm. Interesting way of looking at it.

I predict that He won't appear until the final season. And He is the Greater Scope Villain of the entire series. If the theories are correct, he created evil, or allows evil to exist, and sends angels to slaughter demons once a year. He won't let the hotels patrons in, and forces "saved souls" to kiss His ass.

It all boils down to finding a producer to give her the money to make these en masse. And assuming that goes well, making Vox and Valentino be the same villains in every season makes no sense. Otherwise all the seasons would be the same. My hunch is that they will be the starter villains of season 1. Then in season 2, someone else, maybe Lucifer or Alastor steps up. Then, finally God Himself.

I heard from Faust that there will be multiple seasons. It wouldn't make much sense to have the same characters be the main villains in EVERY season.

In the Batman The Animated Series episode, Never Fear, Scarecrow creates a new toxin, one that takes away peoples fears. But the drawback to this, is that the toxin makes people more reckless and foolish. Their willing to put themselves in danger, or kill without remorse. Like a number of Scarecrow related schemes, Scarecrow intends to infect all of Gotham with anti-fear toxin, and watch the city tear itself apart.

Bruce Wayne goes in disguise to a support group that serves as the front for Scarecrow's operation, and while searching for info on the anti-fear toxin, Scarecrow catches him, and knocks him out. Scarecrow brings Bruce to the Gotham Zoo, and places him next to a pen of hungry crocodiles to be interrogated. Bruce tries to make Scarecrow think that he's not anyone important and that he didn't know what Scarecrow was doing. He also said he was just looking for loose cash.

Scarecrow's response? "A thief... I thought as much." He then proceedes to infect Bruce with anti-fear toxin, causing him to wander into the croc's pen, where he is attacked. Scarecrow assumes he has been eaten, but of course Bruce survived.

Does this scene give the indication that for all his obsession with the power of fear, and willing to use it to cause chaos, Scarecrow finds common thieves to be disgusting and worthless? Or are you getting a different indication? Here's the clip if you're curious. 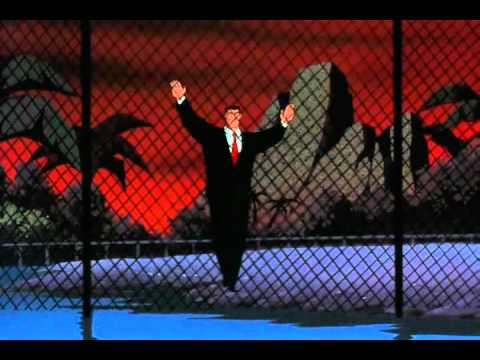 These characters do love, and care for their people, community, society, and even their nation, and often they in turn are loved by them. But what makes them villains in the eyes of the heroes, is the measures they take. For example, a villain like this might often try and stop crime BEFORE it happens via intense monitoring, or sometimes kill or arrest children who show signs of becoming dangerous adults, instead of giving them the help they need. Some of these characters even make efforts to control people that their society looks down on, such as the mentally ill, homeless, addicts, minorities, etc.

They often began as heroes, but as they continued again and again to fight evil, they began to take more extreme measures to stop it. But what makes them different from extremists, is that extremists are usually people who work outside the law, and against the people. But totalitarian utilitarians work WITH the law, and WITH the people. As such, the heroes of works like these, tend to be social outcasts, or knights in sour armor who might be somewhat selfish, since they are not allied with society, as society is an enemy of the hero.

Essentially, the traditional roles of hero and villain are reversed in these kinds of stories. Sometimes society does change their minds about the villain, and apologize to the hero, other times they stay on the same sides, it all depends on the writer. But I think a Totalitarian Utilitarian is fitting category, possibly a sub-category of an Extremist.

No. I'm not intending to make an article. I just see this as a source for knowledge and opinions of villains.

That depends on player decisions.

He's not meant to be PE, but thanks for the info.

This is a villain of my own creation. This is for a tabletop roleplaying game. I'm looking for feedback, on if people think that Emperor Valmont qualifies as a villain.

No, this campaign villain.

That's for the players. I'm asking you if you think the Emperor qualifies as a villain.