Freddi Fish 4: The Case of the Hogfish Ranchers at Briny Gulch

To steal the hogfish by using his henchmen.

Thief
"Mr. Big" is the mysterious main antagonist of the computer game Freddi Fish 4: The Case of the Hogfish Rustlers at Briny Gulch. His henchmen are Goby and Moray. Either of 4 certain townspeople could turn out to be Mr. Big.

Gil Barker, who had previously been in Freddi Fish 3: The Case of the Stolen Conch Shell, was having a financial problem, explaining his gum sale.

Nelson had built a barbell in his belt buckle shop in an attempt to have the hogfish exercising. He meant to be a hogfish rancher because it seemed nobody would ever buy any more belt buckles from him.

Mr. Fingers attempted to help Moray lull the hogfish (to no avail). As a pianist, he wouldn't have made enough money for his family of 17 children.

He was sick of always traveling around. Also, he (though he doesn't literally mean this) tells Goby and Moray to put the hogfish in ice. It's not until he's revealed to be "Mr. Big" that he reveals he meant for them to confine the hogfish, proving that the idea of the rustlers getting blocks of ice was a coincidence.

When whichever townsperson is "Mr. Big" reveals his motive, Freddi tells him, "Well, that's no excuse. You all ought to be ashamed. You just shouldn't take things that don't belong to you. It hurts other people, and it's just plain wrong," and then he admits she is right.

Whichever one is revealed to be "Mr. Big" is sentenced to doing hogfish ranch work with his henchmen. 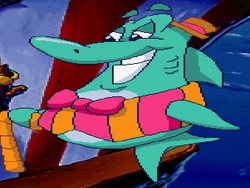 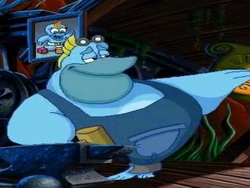 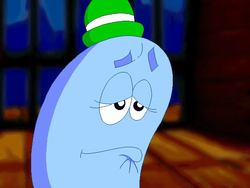 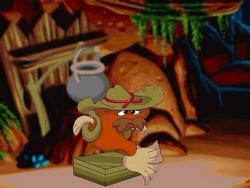 Sahara Slim
Add a photo to this gallery
Retrieved from "https://villains.fandom.com/wiki/%22Mr._Big%22_(Freddi_Fish)?oldid=3458517"
Community content is available under CC-BY-SA unless otherwise noted.