Infused with parasites that grants them supernatural skills (type of skills varies depending on the parasite therapy given to them and the unit's purpose)
The parasites also make them obliviously obedient to Skull Face's orders.

Fulfill directives of XOF given by Skull Face.

The Parasite Unit, also known as the "Skulls", are parasite enhanced super soldiers under the control of Skull Face in Metal Gear Solid V: The Phantom Pain. They were considered to be Skull Face's most fearsome assets and were thus given high-priority missions that the average XOF soldier couldn't handle.

Sometime before the early 1980s, Skull Face discovered an old Diné man under the moniker "Code Talker" who had discovered a species of parasite, likely a holdover from previous experiments by the Philosophers, the precursors of the Patriots, that could be bred to become infectious when the host spoke a specific language. The parasite eventually left the host in a vegetative state as the cognitive functions of the brain were destroyed. Skull Face implemented the parasites with additional technology to create the Skulls.

Their earliest known activities include the butchering of the unit of Kazuhira Miller in early 1984 and the capture of Miller himself, whom they give to the Soviets as a sign of good faith. Later after Venom Snake rescues Kaz from a Soviet controlled village, the Skulls attempt to recapture Miller along with Snake, but ultimately lose track of them and call off the search. They later reappear during Snake's mission to acquire the Honey Bee, where they are ordered by Skull Face to kill him, but again fail to do so.

After extracting Code Talker, Snake's helicopter is attacked by the Skulls, killing both pilots and bringing it down near an air base. There, Snake faces the air base personnel who have now been infected by the parasite and have become Skulls as well. After defeating them, Snake is able to bring Code Talker safely to Mother Base.

The Skulls have glowing green eyes. They also have the ability to jump enormous heights and distances and are quick enough to outrun a horse. they are also able to teleport .

The Parasite Unit comes in variations, some being able to calcify their skin at will, creating strong armor that can withstand most explosions and even vehicle weapons. They can also create stone-like shards to hurl at enemies, capable of dealing heavy damage to vehicles. Another group contains snipers like Quiet. They move quickly, use stealth, and sneak up on Snake if he remains hidden for too long. They are also the most frail, capable of only withstanding three or four headshots from any sniper rifle. A sign that shows that the Skulls are near is mist appearing without warning. 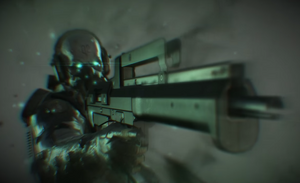 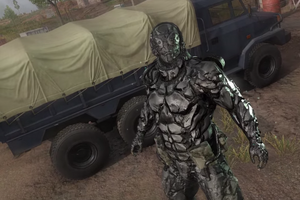 A Skull with armor 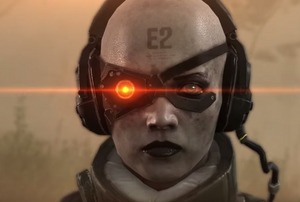 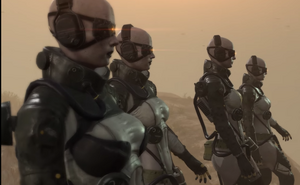 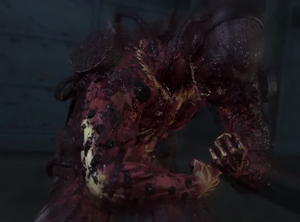 The true parasite-ridden form of the Skulls