Fulfill his immediate desires at all costs.

Destroy his "fake" self and establish himself as the one true Shigeo Kageyama (failed).
Bring the bouquet to Tsubomi and confess to her (succeeded but backfired).

??? is the overarching antagonist of Mob Psycho 100, serving as a minor character in the Teruki Hanazawa, Keiji Mogami, and World Domination arcs and the main antagonist of the ???% arc.

??? is the nickname given to the manifestation of Shigeo Kageyama's immense and uncontrollable psychic power, which only comes out when Mob falls unconscious and will proceed to enact his immediate subconscious will, usually attacking those who opposed him at the time with no regard for the surrounding area. While originally seeming to simply be a state of Mob's being, ??? is revealed in the ???% arc to be a separate subconscious entity or at least a separate personality of Mob.

Before the start of Mob Psycho 100, when Mob and his brother Ritsu were being bullied by three older kids who took their new year's money, Mob blacked out briefly and came to his senses only to see the three bullies bleeding on the ground and his brother injured as well, presumably the first time that ??? awakens in Mob.

This event causes Mob to fear his own power and try to suppress his emotions as much as possible to prevent himself from causing an accident again, and as well causes Ritsu to develop an inferiority complex and jealousy towards Mob for his power.

??? makes his first appearance to the viewers when Mob falls unconscious while defending himself from fellow psychic Teruki Hanazawa. ??? emerges from the rubble, glaring at Teruki with his now glowing white eyes as the former grows excited that Mob seems to finally be ready to fight back.

??? proceeds to humiliate Teruki, vaporizing his clothes and levitating him miles into the air along with the entire school, putting him in his place and inadvertently opening his eyes to the fact that psychic power doesn't make him superior, causing him to be redeemed.

??? appears very briefly when Mob discovers what he believes to be the dead, burning bodies of his family. Mob is driven mad by the sight and ??? nearly awakens, but Mob is stopped when Dimple suggests that the bodies are merely dummies.

After Mob falls unconscious after getting hit by a car, ??? awakens and begins to walk slowly towards Mob and Tsubomi's agreed meeting place, bouquet in hand, while laying waste to everything around him, destroying cars, levitating bystanders and even leveling buildings without lifting a finger. Mob's friends, including Teruki, his brother Ritsu and his former master Reigen Arataka with the help of Dimple manage to get to him, Reigen confessing that he isn't a real psychic in the process.

Mob is then able to confront ??? in his own mind where ??? tells him his motivations and desires and that he'll soon take full control of Mob's body. Mob explains to ??? that what he's doing is wrong, and says that he'll accept ??? as a part of him. ??? expresses his fear of Tsubomi rejecting them, but concedes, assimilating with Mob.

???'s description in the anime. 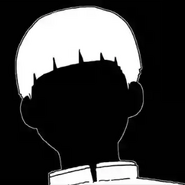 ??? about to explode in the anime's first scene.
Community content is available under CC-BY-SA unless otherwise noted.
Advertisement