Escape from the building and then spread the infection.

Ángela Vidal is the main character in the REC franchise. She is the protagonist of REC and the main antagonist of REC 2 and REC 4. However in REC 4, she later becomes an anti-heroine after getting the demonic worm that possessed her, out of her body.

She was portrayed by the Spanish actress Manuela Velasco.

While reporting on an incident a strange building with her partner Pablo and a crew of firemen that she was following, she was trapped along with other persons as the building was sealed off by authorities. They soon discover that a zombie virus is infecting the residents of the building, the virus infects a bunch of persons during the movie, transforming them into mindless creatures. Angela and Pablo try to escape in the attic of the building during the final scenes, Pablo is brutally killed and eaten by a powerful creature named Medeiros, Angela tries to hide, only to be taken away by Medeiros.

Angela appeared in the half of the movie when the military crew was in the building, she joins the group and tries to escape with them, near the ending. Medeiros appears again, but this time, is killed by Angela herself with a shotgun, Angela is revealed to be a demonic force within the building, and she kills Rosso and the priest, talking in a demonic voice. It is revealed that Angela was possessed by a mysterious larva during her encounter with Medeiros, giving her supernatural abilities and probably driving her insane.

Angela did not appear in the third installment herself due to being locked inside the building, although she was referenced on the television screen.

Angela wakes up on a boat where she and a few survivors from the apartment outbreak are being held to prevent another spread of infection to civilization. She has seemingly no recollection at all of her possession by the parasitic demon. When the doctors discover that she has been infested by the parasite through her video camera, they attempt to perform surgery on her to extract the parasite. Angela fights them off and tries to escape the boat, which is now filled with infected. It is eventually revealed near the end that Angela actually passed on the parasite into a Spanish soldier named Guzman just before the evacuation of the apartment building. The parasite corners Angela and tries to transfer itself from Guzman into her but Angela stops the infestation by killing Guzman with a harpoon gun. Angela then escapes the boat, set to self-destruct by Dr. Ricarte, with another crewman named Nic. Angela is last seen riding in a taxicab with Nic. 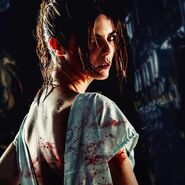