Äs Nödt is a member of the Wandenreich's Sternritter with the letter "F".

Äs Nödt is cruel and efficient, as shown when he relentlessly attacks a weakened Byakuya Kuchiki with his own Bankai. Äs believes in the idea that fear without a reason cannot be overcome. He believes that base instincts cannot be escaped from. He also has a very twisted sense of humour, as when he found out Byakuya survived being disemboweled he joked about how hard it must have been to eat.

Äs Nödt wears the traditional Sternritter hooded cloak over a long, form-fitting trenchcoat. He wears long, black boots and has long, chest length black hair. The lower half of his face is covered by a black mask, which has spikes running down the front of it. His eyes are large and dark, with white pupils. Underneath his mask, Äs is missing most of the skin around his lower face, leaving his teeth and gums completely exposed.

Äs Nödt is part of the invading force that attacks Seireitei. After revealing himself, he proceeds to murder many of the Shinigami from the 6th Division, before being intercepted by Renji Abarai. Renji attempts to fight him, but Äs blocks all of his efforts with Blut Vene. When Mask de Masculine attempts to ambush Renji, Byakuya Kuchiki arrives, squaring off with Äs. Byakuya dispatches Mask, before turning his attention to Äs. Äs approaches the two of them but his arm is slashed by Byakuya's Shikai, shocking him.

Äs then captures Byakuya's Bankai, Senbonzakura Kageyoshi within his medallion as Byakuya attempts to use it against him. Äs grins gleefully upon the successful stealing of the Bankai. Later, Äs strikes Byakuya with one of his thorns, causing him to wonder whether Byakuya understands what is going on or not. Äs surmises that Byakuya thinks he has been poisoned, which Äs points out to be untrue. Äs explains that Byakuya is beginning to feel fear and that one hit from his thorns causes a Shinigami to scream and die from unbearable fear. Äs comments on how well Byakuya appears to be resisting as Byakuya strikes him across the chest. Äs tells Byakuya that he has already been captured by his fear of the Quincy. As Byakuya is shocked to see an image of Rukia dead, Äs impales him through the chest.

Äs explains that fear with a reason can be controlled and that the longer you fight, the less fear you feel. This is the illusion all battle-hardened warriors fall into. Äs then tells Byakuya that he cannot escape his instincts and Byakuya attempts to attack him again. Äs jumps out of the way and activates Senbonzakura Kageyoshi, cutting down the captain. As Byakuya falls to his knees, Äs says how it isn't surprising a Shikai can't defeat a Bankai. Renji then tries to attack him, but Äs uses the Bankai against him as well. Noticing Byakuya get back up, Äs turns his attention from Renji and begins to pummel Byakuya with his Bankai, forcing him into a wall. Renji tries to stop him by activating his Bankai, only to be blind-sided by Mask de Masculine, who kicks him across the battlefield. When Mask de Masculine notes his surprises at a lieutenant being able to use Bankai, Äs tells him to return to their headquarters and reread the Daten they were given, before leaving the scene.

Later, Äs tries to ambush Shigekuni Genryuusai Yamamoto with Bazz-B and NaNaNa Najahkoop, only to be incinerated. Having survived the attack thanks to Bazz-B, Äs Nödt is later present when Yhwach reveals to the Sternritter that Uryu Ishida is to be his successor. Like his comrades, Äs is visibly shocked by the news.

When the Wandenreich invade the Soul Society for a second time, Äs notes the disappearance of the stolen Bankai, as well as the apparent defeats of Cang Du and BG9. Later, Äs approaches Rukia Kuchiki, telling her that he is lonely and wonders where his Senbonzakura is. Realising who he is, Rukia confronts the Sternritter. Äs removes his cloak and asks her if she thinks Byakuya would arrive if he killed her. Äs then summons a ring of reishi thorns and begins to fire them at Rukia, who dodges them as they hit a building, a strange black substance spreading from them. Activating Sode no Shirayuki, Rukia attempts to block the thorn, but is struck by the ooze as Äs tells her that ice can't stop fear. Giddy, Äs notes that she must be frozen from fear now, to which Rukia confuses him by wondering if his fear is something that can't feel fear.

Äs says that something not feeling fear is absurd. He then attempts to fire more thorns at her, which she catches. Äs chides her for her change of heart, claiming that mere moments ago she was attempting to flee from the thorns. Watching as she freezes the thorns, Äs tells her that his fear needs no open wound to infect the opponent - it just needs to come into contact with them. He then explains that everyone has something they fear, and that an individual can always tell why they are afraid. Äs then equates fear to death and tells Rukia that so long as she is alive, there can be no escape from fear. When Rukia tells him that she is indeed dead, Äs finds it impossible to understand, claiming it to be nonsense. He follows her to the ground where they square off. As Rukia explains her ability to Äs, he proclaims how it cannot be in a state of shock as she appears beside him, slicing and freezing his shoulder. Äs leaps backwards, only for the ground to begin to shake beneath his feet as Rukia's ice makes it split. Äs charges at Rukia, but he is sliced by a blade at absolute zero, freezing him on the spot. He then wonders if he is feeling fear.

Äs begins to break free, claiming that what he is feeling isn't fear. He states he is only afraid of the anger of Yhwach and being killed by him as a result. Revealing his Quincy cross to be in his eye, Äs activates his Vollständig as his mask comes free, revealing he has no lips around his mouth. His Vollständig, Tatar Foras, active, Rukia tries to hit him, only to already be feeling fear. Äs proclaims that anyone who looks at him in this form succumbs to the fear and lands behind her, summoning a room of eyeballs. They all stare at Rukia, who begins to scream out from the fear. Äs gloats, but is stopped short as Byakuya Kuchiki arrives, cutting through the room and confronting the Sternritter.

Äs jokes nastily about their previous encounter, wondering if Byakuya lost weight from being gutted and unable to eat. He then tries to activate his Tartar Foras ability again as Rukia tries to warn Byakuya of it's effects. Senbonzakura rips through the eyes however, surprising Äs, who believes it to be Byakuya's Bankai. When Byakuya corrects him however, he thanks Äs for allowing him to establish a greater connection with Senbonzakura. Enraged, Äs transforms again, his body opening up to reveal a terrifying new form as he declares that he won't kill Byakuya - rather he'll keep him in a state of pain where he would wish he was dead. Byakuya tells a newly transformed Äs however that he won't be the one to defeat him and Rukia steps forward. As Äs exclaims that this is some kind of a twisted joke, Rukia activates her Bankai and a white light eclipses the area.

As Äs Nödt recants his final thoughts, he realises just how afraid of death and Hell he truly is, before his last thought is cut short. Completely frozen, he shatters and dies. 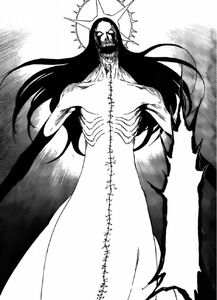 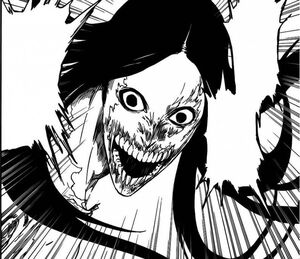 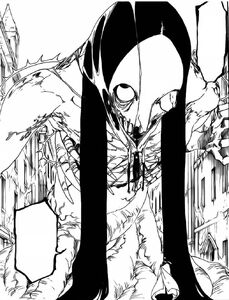