Frenchy (by Ghost)
Traitor (by Kryptis)

Édouard Couteau, also known as Templar, is a featured playable character of the 2019 first person shooter, Call of Duty: Mobile, and the main antagonist turned anti-hero in the Mobile comics. He is a mercenary for hire who is working for "The Fifth Knight" the mysterious leader of the Five Knights and later the Dark Covenant, but betrays the latter when he learns that his daughter is being used as an asset.

Not much is known about Templar, but it's assumed that he is French due to his dialogue with Ghost, and this is later confirmed by him. It's also implied that he was a member or was associated with the United Anti-Terrorism Coalition, as he has a picture of the UAC members. Another indication is when he is confronted by Captain Price, stating that it was good to see him again. If this is true, then he appears to want to get revenge on his former allies for unknown reasons. According to Templar, he would join the French Army when he was seventeen years old, but was seen as sadistic and insane by his squad mates. His commanding officer was Cecila Perrin, who would be discharged and later join the Dark Covenant under the codename "Dame". Couteau would go on to join the Dark Covenant himself so he could protect his daughter, and bring her a happy life.

After donning his armor and weapons, Templar proceeds to threw a few of his knives at a picture of UAC operatives, John Price, John "Soap" MacTavish, Simon "Ghost" Riley, Mara, and Tank Dempsey. When Price and Soap traveled to an unidentified location while the others went to Alcatraz and the Hackney Yard, Templar intercepted the two operatives. During the fight, Templar mortally wounds Soap and has a brief stand off with Price, telling the captain that it was good to see him again. The mercenary then told Price that he had two options, to either save Soap or stop Templar. Price decides to save MacTavish, leaving Templar to escape via helicopter and presumably return to speak with the "Fifth Knight"

After Ghost speaks with Makarov, whom he learns is alive after his assumed death and the organization of the Five Knights, he encounters Templar. The two fight briefly with knifes, with Templar managing to stab and mortally wound Ghost, stating that he expected better from a warrior of equal strength. A dissatisfied Templar leaves Ghost to die of his wounds, taking his mask as a trophy, but Riley would be rescued by Makarov and be given to the Ghosts. After Menendez was apprehended by Charly and her squad, Templar was tasked with rescuing him. Templar murdered Charly's unit but left her wounded by throwing a knife at her, and left the area with Menendez.

Menendez is later apprehended by Mace, who is working for the UAC to help them find his former allies. Menendez was interrogated by General Shepherd and Captain Price for information about the Five Knights, and Raul informed them that Templar was sent to Texas. Due to him being sent to a hideout that Ghost had previously raided, it's assumed that Templar was sent there to find out what what the operative was doing there.

It was revealed that was working under the intention of preventing his daughter from being recruited into the Dark Covenant, by doing all the dirty work of the fifth knight, after Dame's refusal to give him her daughter's freedom, he turns against them, cutting Dame's throat, killing her and fighting the remaining members, leaving them seriously injured, later he meets Simon "Ghost" Riley giving him the identity of the fifth knight and telling him that this is no longer his fight. 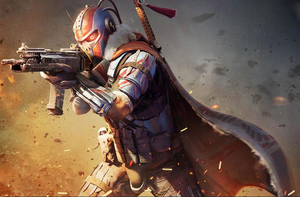 Templar in his "Royal Knight" uniform. 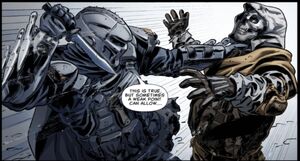