Test his power and if he is right

Ōko (王虎, Pinyin: Wang Hǔ, King Tiger) Oko is a mighty warrior and a villain of the manga Saint Seiya and the anime series of the same name. Only appears in the animated version of the story, in some filler episodes. He was a former pupil of the Gold Saint Libra DōkO (also known as Dohko), and then training partner of Dragon Shiryū, with whom he shares a strong and bitter rivalry. Though not a saint, he somehow drew his attacks from the tiger, which in most Asian myths and legends is the counterpart of the dragon.

Ohko is an orphan. Not much is known of his life. His family is massacred before his eyes by some thugs and this leaves in Ohko, then only a child, an indelible mark in his mind. The boy, eager for revenge and to increase its fighting power, decides to travel to China, in Goro-Oh, to become Dragon Saint. Here is personally coached by Libra Dohko with Shiryu, arrived later than him. Although during the period of training as a knight often proves to be as strong and skillful, Dohko begins after a short time to prefer Shiryu. Aware of this situation, Ohko starts to become more and more angry and unruly, not realizing that the old master him moving away just because paradoxically can not control the anger inside him. Eventually Ohko leaves the place of training may harbor hatred and bitterness toward Shiryu and his teacher and wandering lonely for the different villages often sparking riots in which pours his hatred and anger.

After a few years after its removal, Ohko decides to return to Goro-Oh. On this occasion, almost by accident, Ohko Shunrei that saves from drowning in the river near the waterfall and, shortly after, he runs into Shiryu, who became blind after the clash with Algol, the Silver Saint of the constellation Perseus. Ohko initially begins to hit Shiryu with anger and fury, until Shunrei begs him to stop, pointing out that his opponent is blind. To fight at par and definitively prove to be the strongest and the only worthy of the Dragon Cloth, Ohko decides blindfolded. It is precisely in dealing with the former companion of training that the Dragon Saint, shocked and demoralized by having become blind, he manages to find himself and his lost warrior spirit, the only way to get the victory. In point of death, hatred of Ohko for one who had prevented him from becoming a knight disappears, and remains the affection for him who for many years had been for him a brother, and former student of Dohko dies in arms Shiryu not before asking him to do everything possible to return to being the brave warrior of yore.

Oko, not a Saint, but due to his training (continued by himself after removal of Dohko) acquired a Cosmo (albeit "raw", not having a Cloth), a force, a strength and a resistance equal (and, in some cases, even higher) than that of the Bronze Saint and perhaps even to that of the Silver Saints (which allowed him to take in the chest a Rozan-Shoryu-Ha by Shiryu and come out virtually unscathed), and even a secret weapon:

The Oko symbol is the Tiger (which also leads tattooed on his back) that, in Chinese mythology is the beast attacking dragons for excellence. This detail further accentuate his rivalry with Shiryu, whose symbol is just the Dragon. 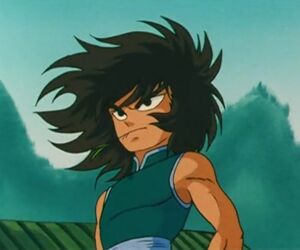 Ōko as a young boy.
Add a photo to this gallery

Retrieved from "https://villains.fandom.com/wiki/%C5%8Cko?oldid=3536655"
Community content is available under CC-BY-SA unless otherwise noted.