Find Bertha and her group and kill them.

Artificial Intelligent Ninja
Otomo (in Japanese: オートモ Ōtomo) refers to a series of androids manufactured by the Kanemitsu Corporation which is owned by powerful businessman Kanemitsu and villains in the 1993 sci-fi/action film sequel RoboCop 3.

They were all portrayed by Bruce Locke.

The first Otomo android meets with the CEO of OCP and then sets out to find the Rebel Hideout. He finds a group of rebels and kills them finding an overlay for a map. He then steals a map and finds the rebel base. He arrives to find that McDaggett and his team have already cleared the base but he waits for RoboCop. RoboCop arrives and is attacked by Otomo. He flips through the air, kicking and punching RoboCop who is knocked off his feet. He continues to try and arrest Otomo. "You are under arrest for assaulting a police officer." As he raises his hand Otomo cuts his fingers off. "And destruction of police property." With that Otomo swings his sword and takes RoboCop's entire hand off. As Otomo is getting ready to strike again RoboCop reaches for his gun attachment and puts it on. Otomo lifts his sword to strike as RoboCop fires a missile, taking Otomo's head off. Otomo's headless body swings it's sword and falls to the ground.

RoboCop flies into the scene with his jetpack and defeats the attackers before he proceeds to the OCP building, where McDaggett is waiting for him. Two other Otomo robots confront RoboCop and nearly manage to defeat him when Nikko and Lazarus succeed in reprogramming them, forcing them to destroy each other. This, however, triggers a self-destruct in both units and cause 30 metres of damage. RoboCop reignites his jet pack, the discharge of flame hitting McDaggett's leg and rendering him immobile, and escapes with Nikko and Lazarus, while McDaggett perishes in the blast.

They are sent to help Paul McDaggett and the OCP CEO overcome the resistance of the anti-OCP militia forces. They are also tasked with destroying RoboCop should they meet. Paul McDaggett, the Rehab Commander, has two Otomo droids in the OCP Tower ready for RoboCop's arrival in case the original fails to stop him (which it does).

The otomo is a humanoid android with enchanced strengh,speed and reflexes. It is armed only with a katana, which otomo has great skill wielding it, but it has shown great skill in firearms. The otomo android also has a safety feature which if defeated it will detonate a minuture nuclear device. 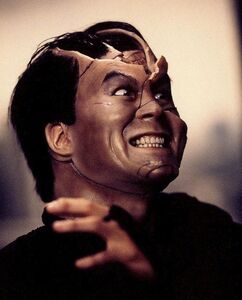 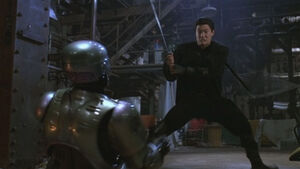