Solidifying blood into discs
Creation of other Dark Matter
Possession

Take over Popstar and possess all of its inhabitants.

Turn the universe into a "Dark World".

It is a mysterious being who resides within the Hyper Zone and is the source of Dark Matter. Zero's exact motives are unknown, but it is stated that it desires to spread Dark Matter across the universe in order to turn it into a "Dark World". Though it was defeated in Kirby's Dream Land 3, its kind would continue to serve as recurring foes for Kirby.

After the defeat of Dark Matter Blade, 0 launched an invasion of Pop Star and possessed multiple regions. Kirby liberated these lands one by one, then encountered the Dark Matter possessed King Dedede. Kirby drove it out of him and back to the Hyper Zone where 0 resided.

After Kirby and Gooey defeated the Dark Matter using the Love-Love Stick, 0 revealed itself and attacked Kirby. In a desperate attempt to kill Kirby, 0's eye detached from its body, becoming a small bloody eyeball. Kirby defeated this, thus destroying 0 and the Hyper Zone.

0² serves as the main antagonist and the true final boss in Kirby 64. Like Zero, it remains hidden throughout the majority of the game, until the end when the player has managed to collect all of the crystal shards.

In this game, 0² has an angelic appearance and a bandage on its head (which is likely a reference to it pulling its out at the end of Kirby's Dreamland 3). In order to face the creature, Kirby must collect all 74 crystal shards, otherwise Miracle Matter serves as the final boss. Once Kirby defeats the villain, 0² and the Dark Star explode. 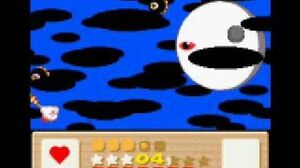 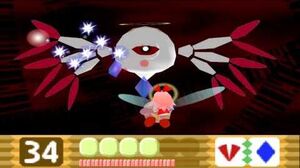