Leader of the Stitchpunks

Wait for the machines to die out.
Kill the Fabrication Machine.

1 is a major antagonist in the 2009 animated feature film 9. He is the self-appointed leader of the Stitchpunks and is the cowardly and arrogant portion of the Scientist's personality.

He was voiced by the late Christopher Plummer, who also played the Grand Duke of Owls in Rock A Doodle, Charles F. Muntz in Up, King Herod in The Star, and General Chang in Star Trek VI: The Undiscovered Country.

1 was the first of the Stitchpunks to be given life by the Scientist, being a fragmentary portion of the Scientist's soul. The portion of the soul given to 1 was the arrogant and controlling side of his personality. As the other Stitchpunks were created, 1 appointed himself as the leader and tried to lead his group through the last few years of the war between the machines of the Fabrication Machine and humanity, though his leadership was put into question by members like 7. When the machines deployed a gas that killed every living thing on the planet, the Stitchpunks were left alone in the world. 1 commanded everyone to remain hidden as the world quieted, and wait for the machines to die out as well. 3, 4, and 7 disagreed and left him, leading to him assuming them for dead.

However, 2 wanted to know more about their origins and researched and studied the science used to bring them to life. Fearing that 2's probing, as well as his age, could potentially endanger them, 1 sent him out into the wasteland to die at the claws of the Cat Beast, lying to him and the others by claiming it to be a scouting mission.

The final Stitchpunk, 9, awakened and found 2, but he was taken by the Cat Beast. 9 is found by 5, who rescues him. 9 is confronted by 1 and his bodyguard 8. 1 explains that they will not attempt to rescue 2 and demands that 9 conform to his rules. 1 and 5 decide to go after 2 anyway, and with the help of 7, find him and kill the Cat Beast. However, 9 accidentally awakens the dormant Fabrication Machine, which kills 2 as the others escape. They regroup with 3 and 4 and decide that they need to see 6 back at 1's sanctuary to figure out how to stop the Machine. They go but are caught by 8.

1 is furious that 9 and 5 disobeyed his commands, and tries to detain them. However, they are interrupted by the Winged Beast, which attacks them and forces them out of the sanctuary. 1 is almost thrown from the roof, but 9 saves him. With 7's help, they are able to defeat the Winged Beast, though 1 is still spiteful about losing their home.

The survivors travel to 7's sanctuary, and 1 belittles them for trying to discover their origins and researching how to defeat the machines. 9 puts together that 1 sent 2 to die, and 1 confesses, causing 7 to threaten him. 1 goes for a walk, only to be found by the Seamstress and captured along with 8. 7 and 9 team up to save 1, but the Seamstress escapes with 8 and 7. 1 wants to forget about them, but 9 insists they go after them. 1 refuses, but after seeing 2's fate, decides to help out.

The group travels to the factory, where 9 goes to help 7 and 8 while the others try to figure out a way to destroy the Fabrication Machine. They end up finding a barrel of oil and plan to light it, igniting it and setting the whole factory ablaze. 9 is too late to save 8, but saves 7 and defeats the Seamstress. The Fabrication Machine sends Spiderbots after them, and 1 tries to blow the factory with the two still inside, but 5 manages to hold him off until 7 and 9 are out. 1 then helps push the barrel into the factory, blowing it up.

With the machines presumed destroyed, the Stitchpunks celebrate while 1 looks on with remorse. However, the Fabrication Machine survived and chased them, killing 5 and 6. 1 decides that it needs to be destroyed, despite 9 warning him that they need to free the trapped souls of the deceased Stitchpunks first. 1 refuses to listen and uses artillery to try and destroy the Fabrication Machine until 9 returns with proof of who they are and what they must do. 9 attempts to lure the Machine out, but 1 nobly sacrifices his own life so that 9 can retrieve the talisman powering the Machine and destroy it.

9, 7, 3, and 4 then release the souls of the lost members, including 1, who places his hand on 9's shoulder before moving on.

Although his goals and intentions are honorable, 1 is arrogant, egotistical, and selfish. He appoints himself as the leader simply because he believes he makes the best judgment and fully believes he is right to remain in hiding. However, if anyone disagrees with him, he has no qualms about issuing harsh judgment upon them, and due to his cowardly and hypocritical view of the world, firmly believes that members of his own group should be allowed to be sacrificed if they oppose him or threaten the group's survival. He demands respect and loyalty, even though none is owed to him. He casts 2 out to die for being "old and weak", despite himself being the oldest and arguably weakest of the Stitchpunks. However, he does have a sense of honor and sophistication, as well as remorse when he realizes that he has gone too far. 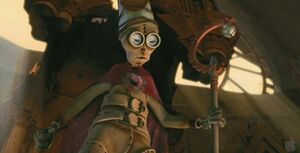 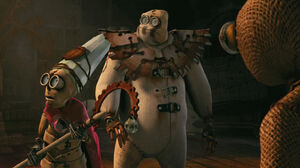 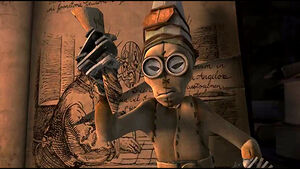 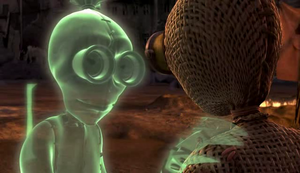 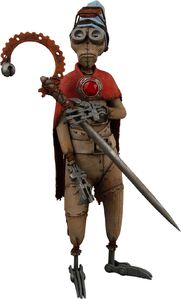