To scare people away from Winterhaven so Mayor Dudley can buy the land cheap (Failed).

The 10,000 Volt Ghost is the main antagonist of The Scooby-Doo Show TV show episode "Watt a Shocking Ghost" and a supporting antagonist in Scooby-Doo 2: Monsters Unleashed.

His vocal effects were provided by the late John Stephenson in The Scooby-Doo Show. In Scooby-Doo 2: Monsters Unleashed, he was voiced by both Dee Bradley Baker and Terrence Stone.

In the episode, "Watt a Shocking Ghost", while skiing at a mountain resort in an abandoned town, the kids hear the 10,000 Volt Ghost has scared everyone away, suspected to be the ghost of a former engineer who disappeared while fixing a loose power line in a snowstorm, and his body was never found after an explosion in the power plant.

The ghost turned out to be a man named Voltner, the engineer who disappeared, working for the mayor who was planning to illegally acquire and sell the land the town is built on.

In Scooby-Doo 2: Monsters Unleashed, the 10,000-Volt Ghost is a giant orange ghost that can manipulate electricity. The 10,000 Volt Ghost is much bigger than he is in the animated series and can travel through electrical circuitry. He is the third monster to be brought to life and originally was to help the Black Knight steal the rest of the costumes from the museum (shown in a deleted scene on the DVD). He attacks the gang when they are in the Monster Hive and chases them up an elevator and to the Mystery Machine. He attacks Daphne later on and defeats her easily. He then meets his end when he is sucked into a pair of jumper cables and into the Black Knight Ghost, causing him to explode. In the credits, it claims he has two voice actors: Dee Bradley Baker and Terrence Stone. 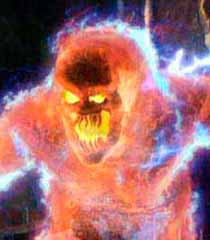 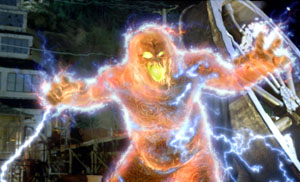