after the foundation of the Kei Pirate Guild

Serve Lord Hazanko and see to that he achieves his goals.

The 108 Stars, also known as the 108 Suns, is a branch of the Chinese Kei Pirate Guild, whose members act as the main antagonists of the interstellar sci-fi/fantasy anime series "Outlaw Star".

The 108 Stars are a branch of the Kei Pirates and are the most brutal member of the Chinese Guild. They are led by Lord Hazanko. Hazanko and his group serve under the Tendo King, the powerful leader of the entire Kei Guild. However, because of the extent of his personal power, the size of his organization and the power of the methods he and his followers use to achieve their goals, it is rumored that the other Kei leaders consider Hazanko superior even to them. Thus, after the Tendo King, Hazanko is one of, if not the most powerful members of the Kei Pirates. It is also said that the squads that carry out his orders use both Tao Magic and a superpower called Sunjutsu(which may or may not be a form of Tao Magic) and always slay those who stand against him.

At the top of the group is Lord Hazanko, beneath him is his personal group of assassins known as the Anten Seven. After them, the 108 Stars are made of groups of 10 or 20, one such group is Soi Len's. The leaders of these groups control independent organizations and they also pursue their own interests. Below 108 Stars are thousands, if not millions, of soldiers and subordinates that comprise the group.

The 108 Suns are based in the Hoppo System residing in the Kei territory. Hazanko resides presumably on the planet Hoppo. Above the planet is a massive space station that Hazanko owns, the stations house a vast pirate armada including Hazanko's fleet and his personal starship, the Geomancer. It is on this station that Hazanko also holds meetings with the Anten Seven. 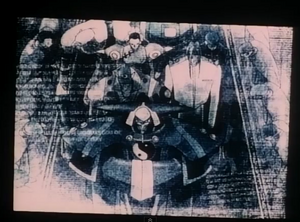 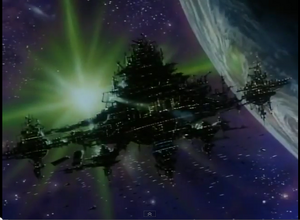 Hazanko's spacestation in the Hoppo System.
Add a photo to this gallery
Retrieved from "https://villains.fandom.com/wiki/108_Stars?oldid=3372589"
Community content is available under CC-BY-SA unless otherwise noted.