Kill Hank J. Wimbleton and anyone else who opposes the A.A.H.W.

Enforcing the tyranny of the A.A.H.W.

They are first shown as an elite squad of the A.A.H.W., ranked higher than Grunts. As the series goes on they become more prominent. In Madness Combat 5, they start to replace Grunts as the main fighting force of the A.A.H.W. However, they often are dispatched by Hank and his allies just as quickly as regular Grunts.

In Madness Combat 7, there are a number of dead agents pinned to walls with sharp objects. It is theorized that they attempted to go against the Auditor, but they may simply be random acts of violent intimidation.

It has been stated that there are four ranks of 1337 agents. 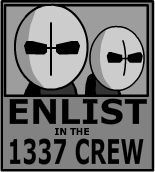 A recruitment poster for the 1337 Crew 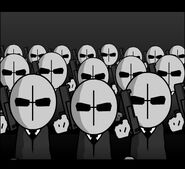 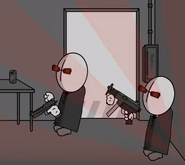 1337 Agents being upgraded by the Auditor.

The Auditor reviving/possessing a deceased 1337 Agent. 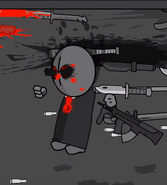 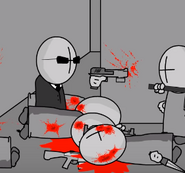 The first 1337 Agent makes their debut in Madness Combat 4: Apotheosis.
Add a photo to this gallery

Retrieved from "https://villains.fandom.com/wiki/1337_Crew?oldid=3532055"
Community content is available under CC-BY-SA unless otherwise noted.