The 29th Street Kings are a minor antagonistic group in the TV series DEXTER. They are a street gang led by a man named Little Chino that are responsible for at least thirteen murders and two attempted murders.

Rafael Arenas, a member of the Kings, is found dead after being butchered with a machete and thrown off a bridge. The motive is deduced to be that Rafael wanted to leave the gang and was killed as punishment by Little Chino. Miami Metro Homicide bring Chino in, but are unable to get him to confess. The only witness they have is Rafael's mother Eva, who Chino discredits by revealing that she's a drug addict and a regular customer of the Kings. Knowing they can't put a drug addict on the stand, and unable to prove Chino's connection to the various other murders committed by the Kings on his orders, the police let him go.

Dexter Morgan selects Chino as his next target and abducts him. He cling films Chino to a table and tries to kill him, but he breaks free and escapes.

Chino orders the murder of Eva Arenas to prevent her from giving the police anything that can help them. The police question him, but he provides an airtight alibi using a tape of him somewhere else at the time of the murder. During the ensuing investigation, Dexter's sister Debra arrests a boy named Joey for vandalism and he tells her where the Kings have their headquarters. This allows Miami Metro to arrest all the members of the Kings besides Little Chino on drug and weapons charges based on what they find. As many of the Kings are on their third strike, they face life imprisonment.

Soon after, Little Chino targets Joey and goes after him to kill him for snitching on the Kings. However, Dexter gets there first and subdues Chino with an electric lance. He then kills him, cuts him up and dumps his body in the Gulf Stream. 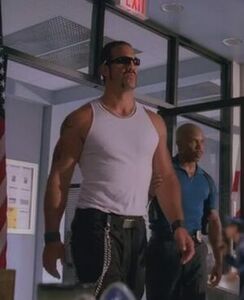 The leader of the 29th Street Kings, Little Chino.