Carry out the plans of Dr. Mabuse as his inheritor (failed)..

Plunge the world into chaos in order to rule it (failed).

The 2nd Dr. Mabuse is a doctor called Jordan who became a fan of Doctor Mabuse and is the main antagonist in the movies "Die 1000 Augen des Dr. Mabuse" and "Im Stahlnetz des Dr. Mabuse". He became obsessed with Mabuse and used his plans and name for his own goal to plunge the world into chaos to become it's ruler. However it's also possible that he's some kind of Mabuse's reincarnation.

He was portrayed by the late Wolfgang Preiss.

In this movie, he was the doctor of the second main protagonist Marion and used her by hypnotising her to make Mabuse/Jordan take control about the empire of millonair Travers. Mabuse failed because Marion loved Travers and resisted his mind control. Jordan wanted to use Travers' nuclear weapons to shoot a nuclear warhead and spreed chaos over the world. At the end, he gets arrested by the police.

Lohmann, the commissioner and Mabuse's arch enemy, tries to find out anything about the syndicate in Chicago, but everyone who seems to be a witness gets killed. Lohmann finds out that Wolf, rector of a mental hospital, is the disguised Dr. Mabuse who tried to team up with the syndicate. Mabuse is apparantly killed by a train during the final fight.

Mabuse kidnaps an actress who's stalked by Professor Erasmus, a scientist who invented a device that makes people invisible, because he wants Erasmus to leave the device. The Professor tries to trick him by telling his assistant how to enter his lab and sabotage the device, however he's talking to Mabuse in disguise. Mabuse is able to hand out a device to each of his men and sends them to an airport where they should kill an entering VIP with a bomb. It fails and one of the minions escapes to the lair where Mabuse shoots him. However the minion sets the lab on fire and reveals that the changed the code that opens the door. When the police arrives and blows up the door, a traumatized Mabuse leaves the lab with a crazy laugh, shouting "I AM VICTORIOUS!". He was taken to a mental hospital by the police. 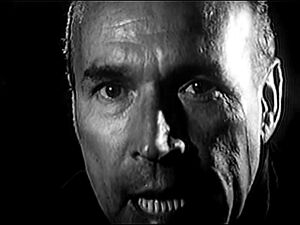 The 2nd Mabuse reveals himself to be still alive at the end of "Im Stahlnetz des Dr. Mabuse".
Add a photo to this gallery
Retrieved from "https://villains.fandom.com/wiki/2nd_Dr._Mabuse?oldid=3292883"
Community content is available under CC-BY-SA unless otherwise noted.