Caretaker of the B'omarr monastery

Tending to the monastery.

Help the Separatists frame the Jedi for kidnapping (succeeded).

Separatist Droid
4A-7 was a Separatist spy droid that served Asajj Ventress during the early part of the Clone Wars to frame the Jedi for kidnapping Jabba the Hutt's son. He was a minor antagonist in the Star Wars: The Clone Wars film.

He was voiced by James Arnold Taylor.

4A-7 was a prototype fresh from Arakyd Industries' droid factories on Mechis III. The droid was made by combining the body and limbs of a Cybot Galactica protocol droid with an oversized head that contained a state-of-the-art cognitive module and recording sensors designed for surveillance.

4A-7 intercepted Anakin Skywalker, Ahsoka Tano and their troopers on Teth, claiming to be a humble caretaker of the B'omarr monastery. Anakin and Ahsoka rescue Jabba's son, Rotta, but discover the Huttlet is sick and needs medical care. They work to fit the protesting Huttlet into a clone trooper's backpack for speedier transport - unaware they are being watched by 4A-7 who recorded the Jedi struggling with the unhappy Huttlet. The recording 4A-7 takes was then transmitted the recording to Count Dooku on Tatooine.

Shown out of context, it looks like the two Jedi are kidnapping a defenseless Huttlet. Jabba was enraged - and 4A-7 had finished his dirty work. After finishing his work, 4A-7 headed for the Twilight to escape but was caught by Ahsoka. 4A-7 insulted the Padawan by calling her a servant girl and she slashed the droid's head with her lightsaber ending the deceitful droid.

4A-7's unremarkable exterior hides numerous spy modules, advanced sensor suites and holo-recorder in its head. A high-band antenna for spy missions is attached to its head. The body contains system conduits and powerbus wires and its metal feet feature magnetic grip. Arakyd specializes in military and explorer droids and had branched out into espionage. The Separatists test the spy droid during the kidnapping plot with 4A-7. 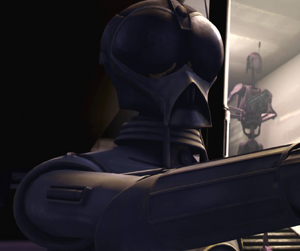