4A-7 was a Separatist spy droid that served Asajj Ventress during the early part of the Clone Wars to frame the Jedi for kidnapping Jabba the Hutt's son. 4A-7 was a prototype fresh from Arakyd Industries' droid factories. It's body was a simple protocol droid with an oversized head that contained recording sensors designed for surveillance.

4A-7 intercepted Anakin Skywalker and Ahsoka Tano on Teth, claiming to be a humble caretaker of the B'omarr monastery. Later 4A-7 recorded Anakin and Ahsoka struggling with the unhappy Huttlet then transmitted the recording to Count Dooku on Tatooine. After finishing his work, 4A-7 headed for the Twilight to escape but was caught by Ahsoka. She slashed 4A-7's head with her lightsaber ending the deceitful droid. 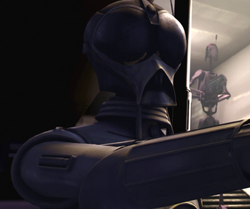 Add a photo to this gallery
Retrieved from "https://villains.fandom.com/wiki/4A-7?oldid=2468620"
Community content is available under CC-BY-SA unless otherwise noted.