Villains Wiki
Register
Don't have an account?
Sign In
Advertisement
in: City of Heroes Villains, Totalitarians, Imperialists,
and 16 more

Obtain global hegemony with its forces.

Maintain and live up to the 'original' ideology of Nazi.

The 5th Column are a group of supervillains from City of Heroes. The organization originated after World War II as a society of Fascists determined to continue a war most other nations were quick to try and leave in the past: they remained a significant threat until they were apparently taken over by the Council, yet those in the know still question whether or not the 5th Column have truly gone or are simply biding their time, waiting for the right moment to rise again.

The Council were an off-shoot of Benito Mussolini's Nazi's. They were built as tribute to Adolf Hitler's German Nazis. One day a soldier called Ridolfo Uzzano was brought onto the group, a man who had gained dark, unworldly powers. Uzzano had originally wanted to be a priest, following up on information of a forbidden sect in the Vatican lead to a fire fight between the sect members and some do-gooding adventurers. Uzzano was swallowed up by the darkness that lurked deep within and wasn't seen again until he reappeared years later to enlist in the Council, however along with his dark powers he was now addressing himself as "Requiem". Mussolini was impressed with the respect Requiem commanded in his troops and quickly promoted him to a command position of the army. Requiem used his position to take vengeance on those who had destroyed the sect and left him to die, marching across Europe on his single-minded quest for vengeance.

History would catch up to events as World War II was eventually won by the Allies and Mussolini was publicly executed. Seeing the death of their supreme commander, The Center, the high-command of the Council, severed all official ties to the Italian government and went into hiding to preserve Mussolini's vision and the resources that had been amassed under the Council. Requiem had planned on assassinating The Center, however the massive reformation, in conjunction with plans from the villainess Arakhn forced Requiem to make alternate plans.

The Council, Nictus and 5th Column

Over time The Council had to change from their original goals as a Nazi organization. Being selective of who could join based on things like skin color, and religion was making recruitment extremely difficult without state conscription to back them. The villainess Arakhn was a mad scientist who had been studying DNA samples from Requiem to reverse-engineer his powers. Where as Requiem had seen this power as divine providence, Arakhn was a scientist first and foremost and dug deeper, revealing the true nature of it as Nictus. The Nictus are a sentient alien energy that go from planet to planet via dimensional tears and possess the residents of the planet, adding the forms of useful creatures to their collective memory to shape-shift into and using the rest simply as hosts to sustain them in the atmosphere. Unwilling hosts burn out quickly and can resist the Nictus but willing hosts become permanent vessels for the Nictus, leading Nictus and host to merge as one. Arakhn's discovery revealed the cult Uzzano had found had mistaken an ancient Nictus as a gift from the heavens, leading the tiny group of worshipers to be built around it through the generations. Arakhn would use the samples to become a Nictus like Requiem, but where Requiem wished to be the sole user of such power Arakhn wanted to spread the power out over the entire Council; The Center approved of this notion, as it would not only grant them power, but allow them to follow their original Nazi philosophy in a more modern age.

Arakhn found a single piece of Nictus could multiply and germinate in a host, one sample of Nictus could be used on the entire organization if properly farmed. The Council reformed it's original outlook - The Nazi's wanted to strive for a "Master Race", thus they redefined the term"Master Race" around the new prospect of an entire planet of human-alien hybrids, all under their banners. As the Nictus did not discriminate along lines of religion, nationality or skin color The Council could recruit anyone they liked, whether Caucasian or African, Christian or Jewish and any other background, thus removing race as a factor for their goals. Recruits into The Council served as ordinary humans until they earned the right to become Nictus, not all mergers go well though and those unable to handle the intensity of a Nictus consciousness merging with their own turn into feral monsters called War Wolves.

While Arakhn was working on her vision of an army of Nictus which would one day take-over the world, Requiem was more focused on the original vision of Mussolini. Requiem was not only opposed to sharing his "gift" with all those around him, he felt The Council was losing it's way, and he began recruiting in secret, soldiers and even commanders loyal to his vision, the vision of the original Nazis, the vision of, as he called it, "The 5th Column". Many of the 5th's Column's commanders were also working as high-ranking members of the Council, but they were loyal to Requiem over The Center. This included Colonel Burkholde, a cybernetics specialist, Maestro, a formally mute scientist who had been given sonic superpowers in an accident involving an experiment to restore his voice and Vandal, a mad scientist with a passion for robotics. By offering each commander resources and support without restriction Requiem was able to get all three commanders' loyalty to him over that of The Center and Arakhn. The rest of the 5th Column were not bought off as much through special conditions but rather because they subscribed to the organization's original notion of what "The Master Race" was.

Requiem eventually made his move for power and with it The Center found many of its own people following Requiem over the proper chain of command. The Council was not overcome and remained in place and Requiem had to go into exile with those loyal to him; However Maestro, Burkholde and Vandal were ordered not to follow Requiem as such they appeared to still be loyal to The Center and acted as double agents within the Council. From the attempted uprising onward, The Council and 5th Column were, for the most part, two different organizations and enemies of each-other.

In Paragon City if players defeated enough Council members, eventually the 5th Column start appearing in their spawn locations instead of more Council. In the Rogue Isles however the 5th Column are not only unwelcome but The Council's alliance with Arachnos depends on keeping them free of any agents of the 5th Column. Arachnos does routine "inspections" of The Council to determine if they can be allies, if Arachnos agents are killed Arachnos considers that unit of the Council as worthy of working with Arachnos, if however The Council cell is wiped out Arachnos considers them too weak to have been allies. Over the course of these investigations Arachnos also patrols for any trace the 5th Column or the organization's original Nazi philosophy. For though Arachnos are militant supervillains they are run by Lord Recluse, who is a World War I vet and supported the Allies during World War II and as such the entire government of the Rogue Isles is strongly, strongly, against Nazis operating in their territory. Arachnos is infamous for its ire, so the 5th Column generally avoids operating in the Rogue Isles whenever possible and no zone in the Isles has 5th Column mobs, they will appear on a select few story missions though. The few times their presence is required in the Rogue Isles though, the Column try to keep it brief and leave as soon as possible before Arachnos becomes aware of them, for Arachnos will dispatch an army or three on the sole task of annihilating even a single 5th Column cell and anyone helping them.

The Nacht Division are standard soldiers of the 5th Column. Picked from the ranks of The Council their skills are virtually identical but their training is focused on speed and stealth as opposed to open combat. In any other army they would be the black-opts unit but the frightful nature of the 5th Column is that what normal armies would considered elite trouble-shooters the 5th Column consider standard storm-troopers.

The Steel Valkyries, Mek Men and Mk II Wolfpack are split among normal human troops as backup and security. Steel Valkyries are airborne robots with medium payloads of missiles and long rang targeting, Mek Men are humanoid drones with super-strength, durability and laser-riffles built into their hands. The Mk II Wolfpack are bulky kill droids with strength, durability and firepower equal to about thrice that of normal Mek Men.

The Raserei Division are the diehard Nazis of the 5th Column, they work to convert members of The Council, white, straight Angelo-Saxon members of-course, to the 5th Column and giving the troops the old-school Nazi mindset, functioning as part high-class soldiers and part proselytizers. The Raserei are trained to an even higher degree than the Nacht Division promoting uniform loyalty and teamwork to take down otherwise bigger or stronger indiviuals through carefully planned tactics.

The Vampyri and War Wolves are guinea-pigs of Nosferatu, a mad scientist who works on cracking genetic codes for the 5th Column. While Requiem dislikes Arakhn's notion of making all troops Nictus he does not discount the benefits of experimentation with the process for other avenues of research. Nosferatu, heads up such research and the Vampyri and War Wolves are the result. Nictus combined with humans may result in turning them into feral monsters overcome by instinct and violence, these are the War Wolves, who take on the appearance of giant anthropomorphic wolves, an outline of one of the previously absorbed races the Nictus assimilated. War Wolves are hard to control but retain just enough control to assume human form; When weakened these humans transform out of instinct into their new wolf form and go into a blood rage as hulking monsters. Vampyri on the other-hand are bio-engineered soldiers created in the image of vampires of lore by Nosferatu, who wanted to see just how far he could push Nictus' effects on human DNA, and just plan like classic monster movies enough to model his work after them. Vampyri can absorb blood, and with it strength and health of their foes, the creatures are not affected by sunlight but can see in the dark and project bursts of negative energy. 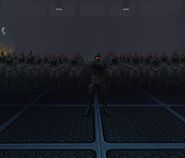