Character in a minigame

Part of the Fazbear Funtime Service

Has a claw inside her stomach

8-Bit Baby is a minor antagonist in the Five Nights at Freddy's franchise.

She is a minigame sprite of Circus Baby.

8-Bit Baby first appeared in Five Nights at Freddy's: Sister Location in the Death Minigame. There, we play as 8-Bit Baby giving cupcakes to children. However, if the player gives every child two cupcakes, gets the ice cream and then goes to the very beginning, there will be a cutscene showing 8-Bit Baby killing Elizabeth Afton. This explains how the real Circus Baby was possessed by Elizabeth Afton.

She later returns in Five Nights at Freddy's AR: Special Delivery as the final challenger in the Arcade Mayhem. She acts exactly like the normal Baby, but much more aggressive, whilst her theme (Turtle Crusher) plays. 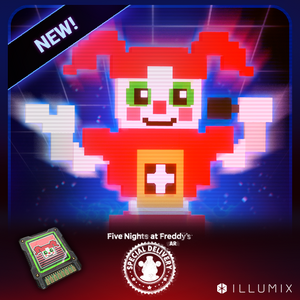