80s Action Hero is a zombie biker who is muscular in his build. He has brown hair, a red headband and a pair of crooked sunglasses below it. He wears a blue denim with a tiger imprinted on the back of it, a white shirt with ripped out sleeves and some unintelligible text on it. He also wears a pair of torn blue jeans with a belt, and a tennis shoe on his left foot and a bandage on his right leg.

80s Action Heroes appeared in the Garden Warfare comics to fight the plants alongside Electric Slides and Space Cadets. 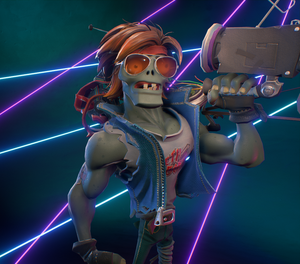