Destroy the B-Squad Rangers (all failed).

The A-Squad Rangers were the elite team of S.P.D. Power Rangers, but joined the ranks of the Troobian Empire, making them supporting villains from Power Rangers S.P.D. at the end.

The A-Squad helped to protect Earth from hostile threats, but at some point, they allied themselves with Emperor Gruumm, since Bridge Carson sensed something strange about their auras when they left Delta Base for a last-minute simulation instruction, as stated in the first episode "Beginnings Part I".

The A-Squad was assigned on a mission to protect the Helix Nebula from the Troobian Empire until it was actually a trap and contact with them was lost.

Defection and Destroying S.P.D. Gamma 4 base

However, this was actually a ruse and the A-Squad bid their time, destroying the S.P.D. Gamma 4 base in the process.

Faking a crash-landing on Gamma-Orion and Return to Earth

They eventually faked a crash landing on Gamma-Orion and sent out a distress signal to get the B-Squad to come and "rescue" them. After they brought the A-Squad back, the B-Squad were frustrated when Commander Cruger dismissed them abruptly to debrief the A-Squad. The fact that they would now be back on "zord clean-up duty", and the realization that they were now back as reserves didn't help, despite all their work over the past months.

However, the A-Squad revealed themselves as traitors and captured Cruger, bringing him to Gruumm's spacecraft. They eventually took on B-Squad and they overwhelmed them at first until B-Squad used their S.W.A.T. Mode, combined with their smarter battle tactics, to defeat them.

However, the B-Squad utilized the S.W.A.T. Megazord to destroy the A-Squad's Megazord with the A-Squad getting imprisoned in the containment cards by the B-Squad as Jack Landors judged them guilty. B-Squad would eventually take A-Squad's place.

Charlie is the Red Ranger, Jack's arch-enemy and the leader of the A-Squad, as well as the first female Red Ranger. Charlie was extremely arrogant and contemptuous of the B-Squad. In their battle with B-Squad, she took on Jack Landors, the B-Squad Red Ranger. After easily defeating him, Charlie taunted the B-Squad, saying they weren't worthy of wiping their boots. But when her team was defeated and about to be captured, she was outraged by the idea that the A-Squad could possibly be beaten by their "inferiors" and said the B-Squad couldn't do this since they were A-Squad, only for Jack to say that they had been demoted before they were imprisoned, much to Charlie's fury.

The Blue Ranger (never given an official name) is a walrus-like, four-eyed alien and Sky's arch-enemy. In the A-Squad's battle with the B-Squad, he took on Schuyler "Sky" Tate, the B-Squad Blue Ranger. The Blue Ranger, unlike his cohorts, never actually talked and ended up imprisoned along with the rest of his team. Greg Aronowitz, when sculpting the character, referred to himself as "The Walrus" and the Blue Ranger was given the name "Beevor" by a fan, which is the name generally used in fandom.

The Green Ranger (never given an official name) is a man of African extraction and is Bridge's arch-enemy. In the A-Squad's battle with the B-Squad, he took on Bridge Carson, the B-Squad Green Ranger. After the B-Squad was first overwhelmed, the Green Ranger, along with his teammates, taunted them by saying they were next choice. However, he ended up imprisoned along with the rest of his team. The Green Ranger was given the name "Cliff" by a fan, which is the name generally used in fandom.

The Yellow Ranger (never given an official name) is a white man and is Z's arch-enemy. In the A-Squad's battle with B-Squad, he fought Elizabeth "Z" Delgado. After the B-Squad Ranger was first overwhelmed, the Yellow Ranger, along with his teammates, taunted them by saying they were second-rate. However, he ended up imprisoned along with the rest of the team. The Yellow Ranger was given the name "Ivan" by a fan, which is the name generally used in fandom.

The Pink Ranger (never given an official name) is an Asian woman and is Syd's arch-enemy. In the A-Squad's battle with B-Squad, she fought Sydney "Syd" Drew. After the B-Squad was overwhelmed the first time, The Pink Ranger, along with her teammates, taunted them by saying they were second best. However, she ended up imprisoned along with the rest of the team. The Pink Ranger was given the name "Rachel" by a fan, which is the name generally used in fandom.

The A-Squad is able to morph instantly without using a Morpher, which grants them armored suits and powerful laser blasters. Overall, their equipment seems similar to the B-Squad's S.W.A.T. mode, which explains why the B-Squad had to use that technology to beat them. The A-Squad are highly skilled fighters and the only reason they were defeated by the B-Squad because they underestimated them.

When the A-Squad first appeared in the two-part episode "Beginnings", they utilized the Delta Squad Megazord, but once they revealed themselves as traitors, they utilized a new Megazord. However, it was destroyed by the S.W.A.T. Megazord, similarly to how the A-Squad was defeated once the B-Squad used their S.W.A.T. Mode.

Interestingly enough, the A-Squad's Megazord is a modified version of Broodwing's Mega Drills that has the ability to transform into a Megazord. Moreover, there are S.P.D. decals built inside the Megazord's cockpit, so it may have belonged to S.P.D. once before; however, its outward appearance is heavily modified in order to fit in with the rest of the Troobian Empire. 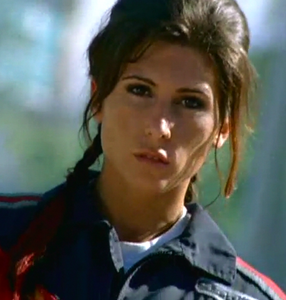 Charlie, the A-Squad Red Ranger and leader of the team. 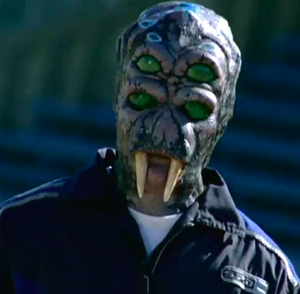 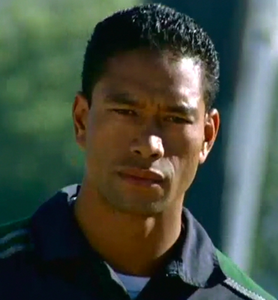 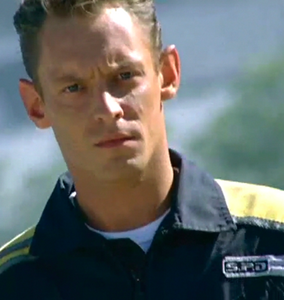 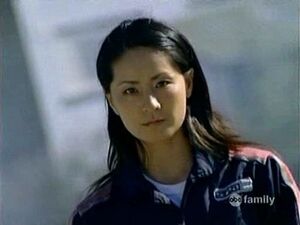 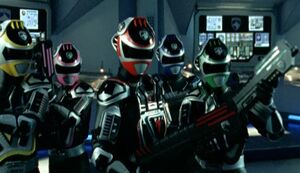 The A-Squad revealing themselves as traitors. 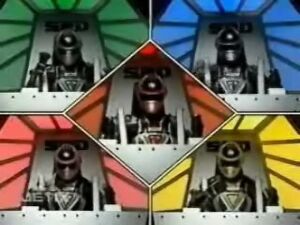 The cockpit of the A-Squad's Megazord. 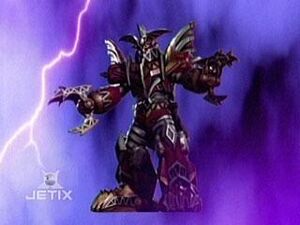 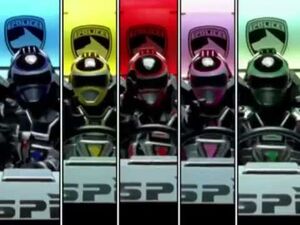 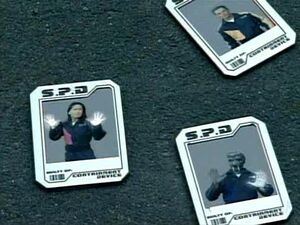 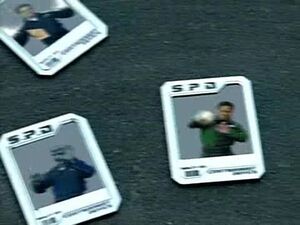 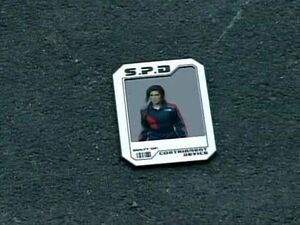