After getting into some minor conflicts with Sonic, Tails, and Bunnie Rabbot, A.D.A.M. pretends to work for Eggman while acting as a being known as "Anonymous", who manipulates Mammoth Mogul and Ixis Naugus, and various other events. His plan is eventually revealed, and even though Eggman destroys A.D.A.M. main programming, he manages to transfer himself to Tommy Turtle through the use of nanites.

He soon sets off to collect all of the Chaos Emeralds with the help of the captured Tails and Shadow the Hedgehog. He eventually does battle with Sonic, Tails, and Shadow in his own Super Form, but after the Emeralds are moved to the "Zone of Silence", he and Tommy are vaporized by the Egg Fleet. 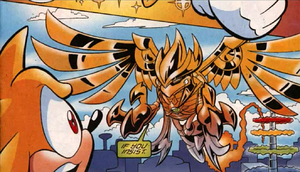