Overthrow all governments (failed).
Join forces with the Maker (succeeded) and take over the world (failed).

A.I.M. split from the terrorist Nazi faction HYDRA, though they remain closely related and help each other. They are an organization of inventors that primarily focus on weapons crafting, especially futuristic weapons, and more generally highly advanced technology, which they sell to various criminal organizations across the world, or use to further their own shady purposes. Though they seem to support other organizations for the sake of money, their actual motive is to craft the ultimate weaponry, allowing them to take over the world.

Although they were initially motivated by Nazism, they later rebranded themselves as "techno-anarchist" with no affiliation to HYDRA, and even loathed fascism; instead, they wanted to topple every government in the world, with the intention of taking over it with their technology showing that they still retained some of their formerly totalitarian mindset.

They are worldwide and possess multiple fronts to cover their operations, such as Targo Corporation, International Data Integration and Control, Cadenza Industries, Koenig and Strey, Pacific Vista Laboratories, Allen's Department Store, and lastly Omnitech, and possibly many more. Their budget is near-limitless, allowing them to perform breakthroughs on a regular basis.

They also had multiple, armed facilities, a nuclear submarine mobile in the Atlantic Ocean; a base in the Bronx,; Black Mesa, Colorado; West Caldwell, New Jersey; Asia, Canada, Europe, Haiti, India, Sudan and Boca Caliente (also known as A.I.M. Island). As expected, they operate in utmost secrecy and most of their bases are completely hidden from the public, though they later publicly claimed the ownership of Boca Caliente, to the point that it was nicknamed "A.I.M. Island".

They were far from united, and suffered a major civil war when their first leader was killed and replaced by its creation. The civil war eventually came to an end, but then some of their members split and created the organization called Advanced Ideas of Destruction, which was far more radical than A.I.M.

All of their members are highly intelligent and talented individuals and are required to have at least a master's degree in STEM or business. Upon entering A.I.M., they are also trained to use guns and even warfare. They also employed mercenaries to guard their secret bases.

Their leadership consisted of a seven-member Board of Directors led by the Scientist Supreme, but they were later overthrown by their creation, M.O.D.O.K., a living computer who promptly assumed leadership of the organization. This, however, sparked a civil war within A.I.M.: agents who remained loyal to MODOK wore yellow, while the dissidents wore blue. Loyalists and dissidents were involved in deadly battles opposing each other, severely crippling the group. Eventually, MODOK was killed, and its leadership was assumed by Andrew Forson.

Though they did many technological breakthroughs, they are mostly known for creating a copy of the Cosmic Cube, a reality-warping weapon that is much sought after in the Marvel universe. However, their Cube was nowhere near as powerful as the original Cosmic Cube, and it turned out to be the avatar of an extraterrestrial being named Kubik, who had no intention of assisting A.I.M., and later even sabotaged their plans.

heir second, most notable achievement is the Super-Adaptoid, an android capable of mimicking the appearance and superpowers of other beings, thus including other supervillains. The Super-Adaptoid was however dispatched by Kubik after he retrieved a piece of Cosmic Cube that was used to give the android its powers.

They are also known for successfully turning one of their scientists named George Tarleton into a living computer, though the head of the Board was killed as a result, and this later sparked a civil war within the organization.

In Avengers World, they used an unidentified device (possibly of their own) to accelerate the flow of time within the confines of A.I.M. Island, so that years passed within the island on a matter of hours outside it, allowing A.I.M. to build a technological empire that posed serious challenges to whoever faced them.

It was created by Alvin Tarleton on the behalf of Baron Wolfgang von Strucker, to assist the terrorist organization HYDRA by supplying them with weapons. They were close to developing nuclear weaponry when American and Japanese troops invaded their only base at the time. Though they suffered a major drawback, A.I.M. survived and split from HYDRA, working in secret and slowly growing by selling their weapons to various criminals; in the meantime, they created M.O.D.O.K., a living computer that took over the organization. A.I.M. also revived Red Skull, the infamous Nazi terrorist that was the main leader of HYDRA.

Their factory in Florida was later raided by the S.H.I.E.L.D. who successfully destroyed it and killed or captured many of their operatives, and in turn A.I.M. raided the S.H.I.E.L.D.'s headquarter, though unlike the latter they were unsuccessful in their operations. They intensified their war against the S.H.I.E.L.D., dispatching several agents and creations against Nick Fury and Captain America, and transforming super-heroine Betty Ross briefly into the gamma-irradiated bird-woman called the Harpy; they also managed to kidnap Iron-Man in an attempt to replicate his armor, though they didn't manage to do so.

After M.O.D.O.K. took over the organization, a schism developed within A.I.M., quickly escalating into a full-blown civil war between those who remained loyal to the computer and those who opposed it. Both sides battled each other, and employed Deathbird as an agent. The rebels also attempted to seize the Cosmic Cube, to no avail. Their internal conflict severely crippled A.I.M., to the point that the S.H.I.E.L.D. considered them to have become minor, if not insignificant threats, though they did continue their experiments, testing Virus X on the Thing and Namor. Later, M.O.D.O.K. ended up assassinated and the organization became reunited as a result.

End of the civil war and expansion

This allowed them to once again focus on their plans to defeat the S.H.I.E.L.D. and take over the world, starting by jet attack on the West Coast Avengers compound, before taking over Boca Caliente with ease as the heroes were completely overwhelmed by A.I.M. fast and strong surprise attacks. However, they claimed to have abandoned all connection to fascism and HYDRA, instead becoming "techno-anarchists" selling weapons on the black market for criminal organizations, though they remained a paramilitary organization that posed a significant threat to the world. They also helped General Thunderbolt create the Red Hulk.

They also created the pocket dimension of Earth-13584, using a sliver of time they obtained to alter certain events so they can obtain highly advanced technology from certain individuals living in said universe. They, however, had to oppose the Dark Avengers, and lose, causing the collapse of their pocket dimension, though the Dark Avengers were able to escape before being erased.

Later, Daisy Johnson sent the Secret Avengers to A.I.M. headquarters in an effort to assassinate Forson, and while they seemingly managed to do so, Forson actually faked his death and came back as A.I.M.'s leader. A.I.M. later used a device to accelerate time in their island, allowing them to build a technologically advanced empire; another organization called Advanced Ideas of Destruction broke away from A.I.M. and competed with each other, though both of them continued to oppose Captain America in various scuffles.

Events of the Maker and destruction

A.I.M. eventually rot away and lost their influence, allowing Sunspot to buy them.

When the Ultimate Reed Richards alias the Maker came to Prime Earth, some of A.I.M.'s scientists integrated his organization W.H.I.S.P.E.R., whose goal is to reshape the world in Richards' twisted vision. To their horror though, many of them were later dissected alive so to be "improved" by Richards, who held no compassion towards any of his minions.

The Maker failed, and most of his minions, including the former A.I.M. operatives, were killed in the process, obliterating the organization for good after decades of terror.

A.I.M. was eventually revived by Toni Ho, though it was turned into the heroic R.E.S.C.U.E. 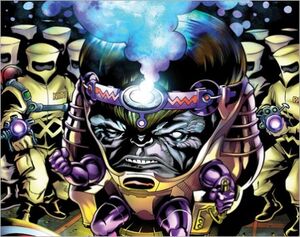 MODOK and his AIM agents.

A A.I.M Soldier in Marvel Ultimate Alliance 3: The Black Order.