Get away with his crimes (failed)

Albert J. Yates is a supporting antagonist of the final season of ShowTime's TV series Dexter.

He was portrayed by Aaron McCusker.

Yates grew up in an abusive home, with his mother often beating him when she was angry. He hid under the bed to escape her attacks, where he could only see her feet.

When he was twelve, he began to show violent tendencies when he hit a classmate with a chair. Eventually, he was sent to an asylum, where Dr. Evelyn Vogel worked with him but found him to be beyond helping. She discovered a lesion on his brain and suggested that he have an operation to remove it. The operation was successful, but unknown to Vogel it left a scar.

After he was released, Yates kidnapped a woman named Kendall Jaynes and tortured her for days by breaking all the toes on her right foot, one by one, before eventually killing her by stabbing her in the chest. He later killed five other women using the same method, each time cutting off their right foot as a trophy.

During an investigation into a new serial killer, the Brain Surgeon, Dr. Vogel approached Dexter Morgan and told him that the killer was leaving portions of brain on her doorstep. They began to go through her list of patients who could potentially be the Brain Surgeon (including cannibalistic serial killer Ron Galuzzo) before eventually deciding on Yates as a suspect.

While investigating Yates at his day job of cable technician, Dexter realized that he had a scar similar to that of the Brain Surgeon's victims. He told Vogel, who remembered the surgery that she made him undergo and thought it might be his reason for targeting her (though unbeknownst to her and Dexter, Yates was not the Brain Surgeon).

Dexter broke into Yates's house and discovered his "shrine", complete with the feet of his six victims, and took fingerprints from them. Unknown to Dexter, Yates was watching him on a security camera and grabbed a taser to go and take him down, but stopped when he realized that Dexter was talking to his former psychiatrist.

Dexter discovered that the fingerprints belonged to several missing women, confirming that Yates was a serial killer, and then went back to his house to confront him. He wasn't there, but Dexter found incriminating evidence that suggested he was the Brain Surgeon (implicitly planted there by the true killer). He also found Janet Thornton, Yates's latest victim, alive and stuffed in a box. He saved her and she gave a statement to the police.

Dexter came up with a way to trap Yates by using his sick father as a lure to get him to the hospital. He called Yates up and told him that his father's heart was failing and he needed to get there to be at his side. Yates rushed to the hospital but was confronted by Dexter. After a short exchange, Yates pulled out his father's breathing tube and set off an alarm to distract Dexter before running away. Dexter got out without being seen, but learned that Yates was capable of anything.

Dr. Vogel was at home when a chair came threw her window and Yates jumped through and kidnapped her. He questioned her about why Dexter went through his house, but she didn't tell him because she thought he was stalking her. Meanwhile, Janet Thornton was able to give a positive ID on Yates, and police went to his house and found the bodies of six women.

Vogel determined that his actions were based on the actions of his mother. She forced him to talk about his mother's treatment of him, but he got angry and decided to start breaking her toes. Deciding to take drastic measures, Vogel slapped him across the face. This emotionally affected Yates, reminding him of his mother, and Vogel hit him again. He moved into the kitchen to clean up a cut lip, and Vogel called Dexter to tell him she had been kidnapped. She left her phone on when Yates came back so he could trace the call.

Dexter and his adoptive sister Debra were able to trace the call to a vacant house that Yates was working on. Just before they arrived, Yates realized that Vogel had called someone on a cell phone and ran away. Dexter and Debra entered and Vogel told them she didn't know where he went. However, Dexter realized he was under the bed and grabbed a curtain rail before jumping onto the bed and impaling Yates with it, killing him. 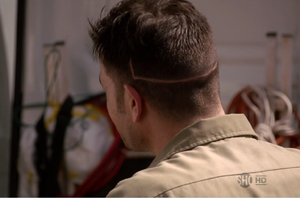 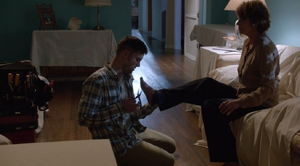 A.J. Yates kidnaps Evelyn Vogel, prepared to break her toes if she attempts to escape.

Dexter kills Yates by impaling him through the back with a curtain rail.
Add a photo to this gallery

Retrieved from "https://villains.fandom.com/wiki/A.J._Yates?oldid=4267304"
Community content is available under CC-BY-SA unless otherwise noted.