Remove half-caste children from their aboriginal families and assimilate them into white society.

Recapture Molly, Gracie and Daisy (failed, but succeeded with Gracie).

Auber Octavius Neville is the main antagonist of the 2002 historical drama film Rabbit-Proof Fence. He is the Chief Protector of Aborigines in Western Australia whose goal is to absorb the aboriginal race into western society.

He was portrayed by Kenneth Branagh, who also played Gilderoy Lockhart in Harry Potter and the Chamber of Secrets, Iago in the 1995 film adaptation of Othello, Dr. Arliss Loveless in Wild Wild West, Viktor Cherevin in Jack Ryan: Shadow Recruit, and Andrei Sator in Tenet.

His primary motivations for removing "half-caste" children from their families is because he wanted to prevent the existence of an unwanted "third race" and to assimilate them into western society in order to prevent them from marrying other aborigines. Since it was widely believed that the aboriginal race was dying out and that they were considered incompatible with living among the white population, Neville wanted to remove the "half-caste" children from their families and "breed the color" out of them through biological absorption until there were no more aborigines in Australia. He saw the aboriginal race as inferior and was convinced that what he was doing was right. No matter how well-intentioned he may have been, his policies towards the Stolen Generations have caused cultural death and sometimes even physical death with the children. Neville believed that by having "half-caste" people marry white people, this would stamp out their aboriginal blood and believed that being white makes them smarter, hence the reason why he particularly targeted half-blooded individuals. Ultimately, his policies were causing psychological damage to the children and making them shame themselves over their identity. Although his role as Chief Protector of Aborigines was to protect the "half-caste" children from abuse by white settlers, his policies were inherently self-defeating, as the vast majority of the half-blooded children were often abused by their masters once they were adopted, both physically and sexually, as shown in the scene where Mavis' employer attempts to sexually assault her.

In 1915, Neville was appointed Chief Protector of Aborigines in the state of Western Australia and pursued a policy of cultural assimilation and biological absorption against aboriginal children under the Aborigines Act of 1905. He also established the Moore River Native Settlement as a place for children to integrate into the white population.

In 1931, Neville receives a letter from Constable Riggs and signs a decree to remove three girls from their family, being fourteen-year old Molly Craig, ten-year old Gracie Fields, and eight-year old Daisy Craig Kadibil. He then hands the papers to his secretary, Ms. Thomas and she heads out to give the papers to Riggs. The girls' mothers, Maud and Mrs. Fields are informed about their proposed removal, but they refuse to turn them over. Riggs arrives at Jigalong and abducts the girls, while their mothers and grandmother vainly try to stop him. Meanwhile, Neville gives out his speech to his white audience about the removal policy and why they need to "protect them against themselves".

The girls eventually arrive at the Moore River Native Settlement and are taken in by Ms. Jessop to be trained for domestic service. The next day, Neville arrives at the settlement and the children sing his favorite Christian song, "Swanee River". After the children finish singing the song, the settlement's superintendent, Mr. Neal calls over one boy named Tommy Grant and Neville examines his skin to see if he will be accepted in white society, but rejects him for not being light enough. When Molly's name is called, she hesitantly walks over and Neville assures her that they'll help her get used to her new life. Neville then examines her skin and decides she's not light enough, meaning she'll stay at Moore River. After an escaped girl named Olive gets recaptured by an aboriginal tracker named Moodoo and locked and beaten in a shed known as "the Boob" as punishment by Mr. Neal, Neville thanks Moodoo for bringing back Olive and states that his daughter isn't ready to have a white family yet before leaving with Mr. Neal.

Fed up with this new life, Molly makes up her mind to leave the settlement with her two siblings and they escape during a thunderstorm. When the settlement finds out that the girls have escaped, Moodoo learns of this and heads out to find them. The girls manage to elude Moodoo by having their tracks swept by the rain and they sleep for the night. Neville later receives a call from Mr. Neal and informs Ms. Thomas about the girls' escape. Neville recalls the time he met with Molly and notes that he underestimated her intelligence. The next morning, Moodoo is hot on the girls' trail, but they manage to elude the tracker once more after crossing a river. Neville is annoyed to hear that the girls have outwitted Moodoo and sends the police to look for them.

The three girls arrive at a farm, where a farmer gives them food and clothes and gives them directions to the rabbit-proof fence, which will show them the way back to Jigalong. The girls eventually manage to find a part fence and begin following it. When Neville finds out that the girls are following the rabbit-proof fence, he devises a plan to have Moodoo and police troops trap them at Yalgoo and recapture them there. The girls come across a worker and he informs them that they're on the number two fence. Molly realizes that they've been following the wrong fence and have been heading west instead of north. The camper directs the girls up north to the number one fence and their detour has saved them from getting caught by the search party.

The girls come across a house in Queue and are invited by an aboriginal housemaid named Mavis, who also happens to be a former Moore River inmate. That night, when the search party arrives after the property's owner discovers the girls hiding, Mavis helps the girls escape and they hide in a bush. The authorities leave after failing to find the girls and the girls continue following the fence. The next day, the search party returns and continues following the girls, but the girls once again thwart them. Neville gets desperate and comes up with a plan to capture them before they head into desert country, so he spreads the word that Gracie's mother is waiting at Wiluna and hires a camper to wait for the girls. Riggs decides to continue searching for the girls, while Moodoo gives up on the search, admiring Molly for her cleverness.

The girls come across the camper and he informs them about them being in the newspapers. The camper tells Gracie that her mother is waiting at Wiluna and she parts ways with Molly and Daisy to find her mother. Molly and Daisy eventually arrive at Wiluna, where they find Gracie waiting at the train station. Molly calls her over, but before Gracie can walk over to them, Riggs finds her and recaptures her before taking her back to Moore River. Neville sends Riggs to Jigalong to wait there for the two remaining girls to arrive and recapture them. As time passes, Riggs suspects that the girls are up to something and decides to head to the fence to check out. However, he comes across the girls' mother and grandmother, who scare him away. The two girls finally arrive at Jigalong, where they are happily reunited with their family.

Realizing that he has been defeated, Neville calls off the search for the girls and informs Ms. Thomas to keep Riggs informed about the girls' whereabouts, so they can be recaptured at some point in the future. While his secretary is writing his letter, Neville states that he wishes that the aborigines would understand their well-intentioned goals and Ms. Thomas sends his letter.

An older Molly states that she eventually got married and gave birth to two children a decade later. Then she and her children were taken back to the Moore River Native Settlement, but she walked all the way back to Jigalong with her youngest daughter, Annabelle. However, when Annabelle turned three, she was taken away and Molly states that she never saw her again. Molly implies that Gracie is dead and says that she's never going back to Moore River again.

An epilogue states that Neville retired in 1940 and that the assimilation policy remained in place until 1970. Even though the policy has ended, many aborigines continue to suffer from the destruction of their identity, family life and culture to this day. 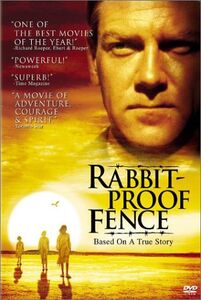 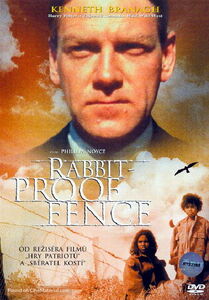 Neville in his office. 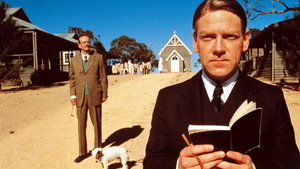 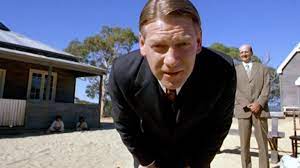 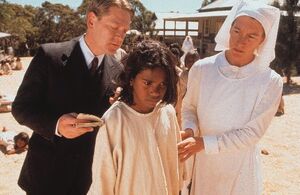 Neville examining Molly's skin to determine if she's light enough to be trained as a domestic servant. 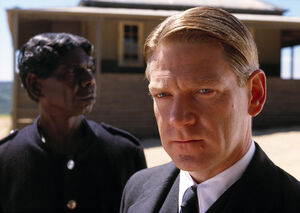 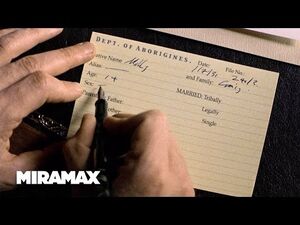 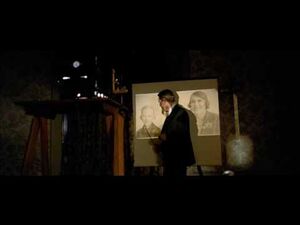 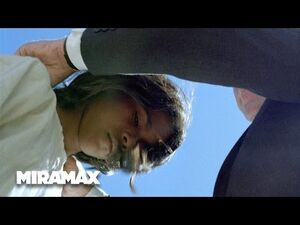 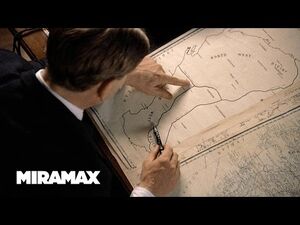 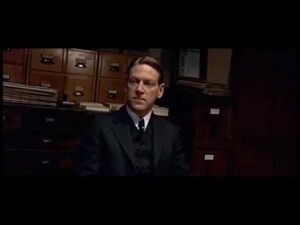 Rabbit Proof Fence Scene
A.O. Neville calls off the search for the girls.