End the oppression of transhumans and restore human rights to augmented people.

The Augmented Rights Coalition (also known as ARC or A.R.C. for short) is an organization and one of the major factions in the sci-fi dystopian shooter videogame Deus Ex: Mankind Divided. Formed to help augmented people, ARC was soon reformed and now fights for the political rights and freedoms of augmented people. While they do have noble goals, many ARC members have engaged in violence and active terrorism across Europe via bombings and have since than been labeled as a terrorist organization

ARC was originally a set of loosely structured groups who were formed to help many people get through their augmentations and were dedicated to helping people get through their transition with their new augmentations. In the devastating aftermath of the Aug Incident however, the different groups had all reorganized and merged into the Augmented Rights Coalition and became a civil rights activist movement with the goal of undoing injustices and regaining the equal rights and treatment of all transhumans and augmented people around the world. ARC is currently based in Germany where its headquarters is at and is the home country of its leader, Talos Rucker.

In the year 2029, ARC has reformed into a political movement united under the banner of returning basic civil liberties back to the world's augmented population and is now headquartered in Germany. At the beginning of Mankind Divided, the Ruzica Station in Prague, Czech Republic is bombed and an ARC member Ivan Berk is responsible for the attack. Talos Rucker, ARC's leader, sends in a letter to the Czech Government condemning the attack but his organization comes under investigation and is labeled a terrorist organization. Task Force 29 then sends in Adam Jensen to investigate and finds one of their majro bases in Golem City/Utulek Station, an augmented ghetto where augmented people are forced into and are spearated from society. Jensen manages to break through the defenses that were set up and he eventually runs into Rucker who had been expecting him to arrive for some time. Rucker then tells Jensen that he knows that members of ARC are going behind his back and betraying the organization's founding ideals and has a private investigation set up to find out who's responsible and fix ARC's reputation. Eventually however, Jensen is then chased out by a large squadron of ARC Soldiers and he manages to escape where he sees Viktor Marchenko as they exchange a look as Jensen flies away and escapes.

ARC was originally created to help augmented people get used to their new augmentations but was eventually reformed into a civil rights movement in response to horrific and inhumane treatment of augmented people in the aftermath of the Aug Incident. They now act as a political organization in an effort to convince governments to treat augmented people with respect and gain back their lost human rights. Extream members live Victor however, are known for using violence and act as terrorists in response to government persecution. A small splinter-cell of ARC Members has formed a terrorist cell and acts as the unofficial military wing of the organization.

The Coalition usually engages in various political activities and protests in response to the oppression that they face around the world. Many members are implied to participate in peaceful demonstrations as non-violence is part of ARC's overall ideology but, many members are shown to have engaged in terrorism as one member, Ivan, had been responsible for the bombing of the Ruzica Station and in a map of a news report in the reveal trailer, much of Western Europe has been hit with terrorist attacks from augmented terrorists leaving much of ARC being active in terrorism.

Despite the terrorist label, ARC itself has decent amount of political power and influence in many countries around the world. Since they are global, they have been able to amass large numbers of supporters and members who fight for the rights of augmented people everywhere. This has resulted in fearmongering from Right-Wing Media and other Far-Right Politicians who seek to control augmented people and keep labeling ARC as terrorists resulting in TF29 investigating them constantly. 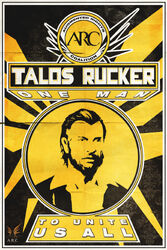 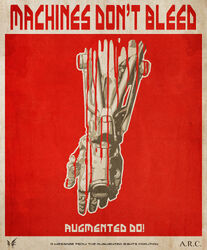 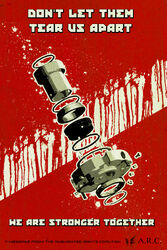 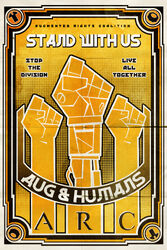 "Stand with Us" poster

Concept art of A.R.C. insurgents.
Add a photo to this gallery
Retrieved from "https://villains.fandom.com/wiki/A.R.C.?oldid=4233243"
Community content is available under CC-BY-SA unless otherwise noted.