Militaristic Corrupt Officials
The A.S.A. is a villainous organization in the 2018 CW series Black Lightning.

The A.S.A. is a secretive government organization that has illegally experimented on the citizens of Freeland for over thirty years. This has resulted in the creation of several meta-humans, including the hero Black Lightning.

For over thirty years, the A.S.A. has conducted a secret experiment on the people of Freeland. They provided the people of Freeland with a vaccine that was supposed to keep them docile but as a side-effect, it also turned some of them into meta-humans. To deal with these problems, the A.S.A. sent their operative Peter Esposito to Freeland to find the meta-humans so that the A.S.A. could then capture them, bring them to their lab and experiment on them.

However, when Esposito found out that the A.S.A. was killing children in Freeland, he leaked evidence of the organization to journalist Alvin Pierce. Pierce's investigation into the subject - which presumably linked the A.S.A. to city councillor Tobias Whale - ended with Pierce being murdered by Whale. This, in turn, caused Pierce's son - one of the meta-humans created by the A.S.A. - to become the superhero Black Lightning.

About three decades later, a rogue A.S.A. faction led by Martin Proctor has evolved their vaccine into the drug Green Light which they are distributing through the criminal cartel of Lady Eve, which also entails the 100 Gang led by Tobias Whale. However, after differences between Eve and Whale lead to Eve's murder, Black Lightning - who has returned to the city as well - is blamed for the murder. This causes Proctor, to realize that Black Lightning is a far bigger problem that initially expected. As a result, he calls A.S.A. operatives into the city to kill Black Lightning on sight. He also puts a bounty on the superhero, so the criminal underworld of Freeland will hunt him down as well.

Although his connection to the A.S.A. is basically severed, Esposito - now going under the name Peter Gambi - starts investigating again. This leads to him finding the laboratory where those he captured 10 years ago are still stored in cryo-sleep. The lab is attacked by Black Lightning and his daughter Thunder soon after, and they destroy most of the equipment that is used for the creation of Green Light. However, while they do so, the A.S.A. assault team Proctor called into the city arrives and attacks Black Lightning. They manage to temporarily deactivate Black Lightning's power somehow, but due to Thunder's interference, Black Lightning is saved and the entire A.S.A. laboratory is completely burned down. In search for the pods containing the kidnapped teenagers, Black Lightning and Thunder attack another A.S.A. facility where they find heavy weaponry designed for killing Black Lightning. After the weapons are destroyed, Proctor orders his new spotter in Freeland, Kara Fowdy, to eliminate Pierce.

Proctor eventually sends all his operatives in a battle against Black Lightning and Thunder, allowing Tobias Whale and his henchmen to storm the A.S.A. headquarter. Only Proctor is left alive and can flee but is soon after killed by Peter Gambi who has realizes that Proctor is not acting on the government's orders but is leading a rogue faction of the A.S.A. to fuel his own xenophobic beliefs. After Proctor's death, the meta-humans captured by the A.S.A. are freed from their stasis and the villainy of Proctor's plans is revealed to the public. 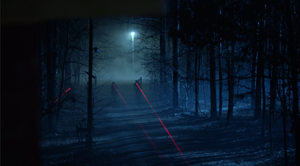