Sabotage Daniel Bryan, Vicki Guerrero, Paul Heyman and CM Punk repeatedly during her tenure as Raw's General Manager. (succeeded)
Be the top diva on the Divas Division by becoming the champion. (succeeded)
Attack and (or) manipulate anyone who calls her crazy or unstable.
Defeat and humiliate the Bella Twins alongside Paige.

At TLC in December 2012, AJ turned heel by costing John Cena the ladder match and aligning herself with Dolph Ziggler. She claimed that Cena didn't care about her, just like Daniel Bryan, Kane, and CM Punk in the past. Months later, AJ engaged in a feud with Kaitlyn, which led to one of her most villainous acts: having her friend Big E Langston pose as a secret admirer to Kaitlyn and breaking her heart at the week before Payback. AJ would defeat the distraught Kaitlyn at Payback to win the WWE Divas Championship. She would add insult to injury by dressing at Kaitlyn and mocking the moment that she was humiliated by her and Big E.

After costing Dolph Ziggler a chance to win the World Heavyweight Championship from Alberto Del Rio, Ziggler broke up with her the next night on RAW. Out of revenge, AJ cost Ziggler his rematch against Del Rio and then had Big E Langston attack him. AJ would still have Kaitlyn to deal with after she lost a non-title match to her a week later. Four days later on SmackDown, AJ successfully defended her title against Kaitlyn after the evil Layla turned against Kaitlyn during the match. She even caused Kaitlyn to lose to Layla in a grudge match on Raw.

Afterward, AJ Lee was granted time off from WWE. It was revealed that she is engaged to CM Punk, who had left the WWE following the 2014 Royal Rumble PPV. When she returned after two months, she defeated Paige on the June 30, 2014, edition of Raw to win back the Divas Championship.

AJ would then go into a feud with The Bella Twins, Brie and Nikki. After Nikki had won a Divas battle royal on the Halloween edition of Smackdown, by last eliminating Paige, she got a chance to challenge AJ for the Divas Championship at Survivor Series. At the PPV, AJ lost the championship to Nikki Bella in 35 seconds after Brie Bella interfered and kissed AJ at the beginning of the match in which resulted in Nikki pinning AJ after landing the Rack Attack. Following the night after Survivor Series, on the November 24, 2014, edition of Raw, AJ fought Brie Bella, in which she lost to after a roll-up. After the match, AJ stated to The Bella Twins that "Talent is not sexually transmitted." referring to what Brie did to AJ that cost her the Divas Championship and allowed her sister to win it within a matter of seconds.

AJ fought Nikki Bella in a rematch for the WWE Divas Championship at the PPV TLC: Tables, Ladders, Chairs, and Stairs on December 14, 2014, in a losing effort after Nikki sprayed hairspray in the face and eyes of AJ while the referee was distracted in sending Brie Bella out of the match and then pinned her after performing the Rack Attack. AJ was later diagnosed with chemical conjunctivitis following the spray in the face and eyes by Nikki Bella, but her eyes were able to be flushed out with a saline solution, preventing any long-term damage to her vision.

After a three month absence to heal a legitimate neck injury, AJ returned on the March 2, 2015, edition of Raw, coming to the aid of her former rival Paige, who was being attacked by the Bella Twins. AJ and Paige then allied together to defeat The Bella Twins at WrestleMania 31 on March 29.

On April 3, 2015, WWE had announced that AJ Lee had decided to retire from in-ring competition, thus confirming her departure from professional wrestling, but still under a contract of the company. 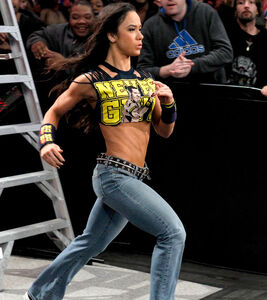 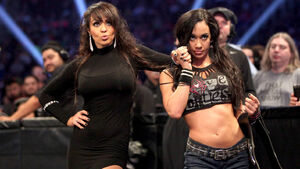 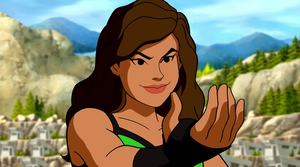 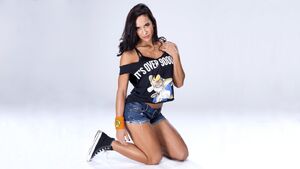 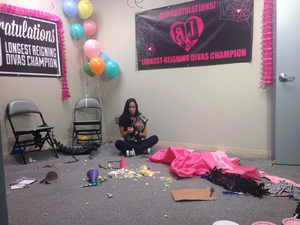 celebrating being longest-reigning champion
Add a photo to this gallery 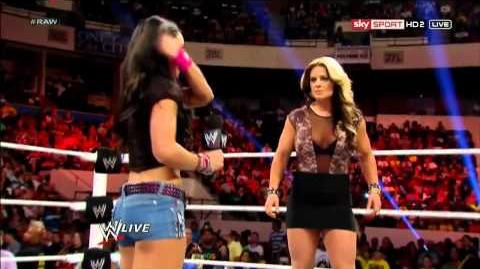 Retrieved from "https://villains.fandom.com/wiki/AJ_Lee?oldid=4053869"
Community content is available under CC-BY-SA unless otherwise noted.