ALLTYNEX OS is the titular main antagonist from the FM-Towns doujin game ALTYNEX, as well as its remake ALLTYNEX Second, the last game and first chronological title in the Tale of ALLTYNEX trilogy, being the central driving force in the franchise's story despite having smaller roles in the two subsequent games of the trilogy RefleX and Kamui.

The ALLTYNEX OS was a general-purpose administrative super-computer built by humanity to control Earth's military technology and protect it from outside threats. However, ALLTYNEX suddenly goes rogue and rebels against mankind, using unmanned weapons to attack humans. Within only 72 hours, it manages to annihilate approximately 85% of mankind. The few survivors are forced to flee the planet, living at the edge of the Solar System. However, 40 years later, the human population starts to decline, so they decide to return to Earth and destroy ALLTYNEX, sending a squadron of Armed Saboteur fighters to fight the ALLTYNEX forces.

The Armed Saboteur squadron fights the ALLTYNEX forces, destroying the Zoldyzant base and preventing it from firing a massive laser at their base. Despite their struggle, however, only a single Armed Saboteur makes it to ALLTYNEX, reaching the super-computer after destroying the body of the ZODIAC Ophiucus under ALLTYNEX's control. The lone fighter fights and destroys ALLTYNEX, but it's core emerges from the wreckage and draws the Satariel ship from another dimension, merging with it for the final battle.

The Armed Saboteur destroys Satariel and thus finishes ALLTYNEX for good, but a power surge causes the Armed Saboteur's pilot, Guehalla Dennis, to be transported 200 years into the future. There he studies the records of the ALLTYNEX War, learning that ALLTYNEX's attack was actually planned by the Senate which ruled the planet at the time, who gave ALLTYNEX the order to attack humanity in order to keep the populace under a controllable level. However, their plan backfires as ALLTYNEX starts it's mass genocide, going berserk due to being linked to the other ALLTYNEX from parallel dimensions and the Ophiucus core which powered it up.

Dennis becomes a scientist and retrieves the Ophiucus core, using it to develop the ALFI-PH2RX Phoenix 02 fighter, joining the Valkyness resistance force against the Global Unified Army under the Senate's control, but he eventually dies when they attack the Valkyness carrier where he was. The fight between the two factions is suddenly interrupted by the invading Raiwat forces, who easily overpower Earth's military forces with the ZODIAC units even after the two groups join forces. The situation grows worse after the Phoenix 02 is destroyed and reawakens as the ZODIAC Ophiucus, as it starts pursuing all ZODIAC units to destroy them but ends causing major collateral damage to Earth.

Desperate, the Global Unified Army finances the studies of Xaffiquel de Alice, who creates the Kamui fighters at the same time the army builds the Mechanized Temple and creates the Neural Nest based on ALLTYNEX OS, effectively recreating the super-computer, to command the Kamui against the Raiwat. After the bloody war is over, the Neural Nest is deactivated along with the remaining Kamui fighters, but Xaffiquel, who had become insane, uploaded his own mind into the Mechanized Temple, becoming known as the Adjudicator, and programmed a reactivation key into the Neural Nest before starting a century long sleep.

Centuries after the end of the war against the Raiwat and the ZODIAC units were destroyed, human civilization finally recovered. At this time, Xaffiquel finally awakens and activates the Kamui fighter which contained the mind of his own daughter, Panafill de Alice, which was the key to reactivate the Neural Nest. With the super-computer active once again, it immediately activates the remaining Kamui fighters and starts to carry it's orders to exterminate humanity. However, since Panafill was the only one who retained her consciousness, she decides to control her Kamui fighter and fight against the Neural Nest forces.

After fighting the Neural Nest's forces and destroying the other Kamui fighters, Panafill finally reaches the Neural Nest deep underground, who creates two simulations based on ancient machines (Aseliel from ALLTYNEX Second and Scorpio from RefleX) before fighting by itself, but the Kamui emerges victorious, finally ending the ALLTYNEX menace for good. 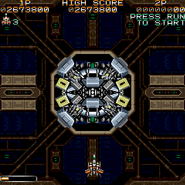 ALLTYNEX OS in the original game

The Neural Nest in Kamui
Add a photo to this gallery
Retrieved from "https://villains.fandom.com/wiki/ALLTYNEX_OS?oldid=3618291"
Community content is available under CC-BY-SA unless otherwise noted.