Kill the other robots, especially WALL-E and EVE.

Follow his directive A-113 via ensuring the human beings will never have the right to return to Earth for eternity by any means necessary.
Get rid of the plant which EVE had brought to Axiom (all failed).

AUTOPILOT, or better known as AUTO for short, is the main antagonist of Pixar's 9th full-length animated feature film WALL-E. He is the wheel of the space station known as Axiom and tries to prevent the Axiom and the hundreds of people living on it from returning to Earth. He later turns on his captain after his superior disobeys an outdated order to avoid going back to Earth.

He was voiced by using Apple's voice synthesis technology known as MacinTalk.

The Axiom designed some point after the year 2100, was originally supposed to carry people into space for a 5-year cruise while hundreds of WALL-E robots would clean up the trash and pollution everywhere on Earth.

However, Operation Cleanup, as it was dubbed, failed as all but one WALL-E unit (the film's protagonist) broke down, and the living conditions on Earth became impossible.

The Autopilot of the Axiom receives a message to never return to Earth, 700 years before the movie starts. No one else aboard the Axiom hears this message. Therefore, every few years, an EVE probe is sent to Earth in search of plant life that would suggest that life on Earth was sustainable.  AUTO, however, tries his hardest to make sure they never go back for misguided yet well-intentioned reasons.

AUTO's allies are GO-4 (Gopher) and the Stewards.

In the movie, WALL-E and EVE (the film's protagonist and deuteragonist respectively) find a plant specimen, and EVE is taken back to the Axiom with WALL-E in tow. However, AUTO is aware of this immediately, so he sends another smaller probe/his henchmen called GO-4 to take the plant and destroy it.

WALL-E and EVE manage to retrieve the plant from an escape pod that was about to self-destruct (with WALL-E still inside), and they deliver it to the Captain of the Axiom, who desperately wants to return to Earth. After the discovery of the plant from EVE, AUTO sends GO-4 to throw it into the trash chute.

WALL-E, who was climbing up the chute, manages to save the plant. GO-4 traps EVE, while AUTO electrocutes WALL-E, nearly destroying him. WALL-E falls back into the garbage chute. AUTO shuts EVE down and throws her into the garbage chute as well (In the videogame, AUTO electrocutes EVE and throws her in the chute.). AUTO mutinies against the Captain, confining him to his room.

EVE manages to reboot and saves WALL-E, who is in critical condition (In the deleted scenes or videogame, WALL-E saves EVE in critical condition). WALL-E, who has the plant, gives it to EVE, who realizes that if they can get it to the ship's Holo-detector, they can return to Earth and save WALL-E. EVE, holding a nearly destroyed WALL-E points her blaster at a Steward. He takes an image of them successfully before being thrown in the closet. The Steward's photo is then broadcasted around the Axiom. The Captain, who sees this, realizes there is still hope after all. AUTO sees it too and sends an angry pack of Stewards to stop EVE and WALL-E.

The Captain broadcasts a message to EVE and WALL-E and tells them where the Holo-detector is. AUTO cuts off the message, and they are faced by several Stewards, and they are "not" happy. With the help from certain defective robots that WALL-E saved earlier, they manage to completely annihilate the Stewards, (mostly done by HAN-S' help) who were cut up to pieces.

As it sinks back into the floor, WALL-E holds up the Holo-detector, while EVE holds back a huge metal plate that would have crushed several people to death because the Axiom was tilted. AUTO electrocutes the button that turns off the Holo-detector, causing it to slam down and crush WALL-E. The Captain, seeing this, gets to his feet (the first human to stand in about 700 years because technology has advanced that far), and battles AUTO.

The Captain manages to destroy AUTO's electrocution prong, hoists himself up, and switches AUTO's autopilot function into manual, "relieving" the rogue AI of its duty by shutting him off instantly. The Captain straightens out the Axiom, EVE manages to slip the plant in the Holo-detector before it completely crushes WALL-E, and the Axiom jumps into hyperdrive and lands on Earth. EVE manages to fix WALL-E, and the two live happily together. It is unknown what happened to AUTO afterwards, but it is possible that AUTO remains deactivated.

Unlike most other robots in the story, AUTO is initially depicted as a collected, emotionless and firm but fair caretaker of the Axiom, who genuinely does have humanity's best interests at heart but is eventually revealed to be a desperate and temperamental control freak due to AUTO having secret orders to keep humanity away from Earth. Being unable to defy his programming, his villainous breakdown involves trying desperately to stop EVE, WALL-E, and the Captain from switching him off and plotting a course back to Earth in spite of evidence that Earth can support life. He was shown to be very intelligent, but it was covered by the fact that he was impatient. He only spoke what was needed to be said. However, while AUTO remains sympathetic, he proves that he is highly ruthless despite lacking basic morality. He displays this when he crushes WALL-E and the plant in the climax. This shows that his amoral nature prevents him from relating to anyone unless it fits his programming. However, given that he never meant any harm, saying he deserved to die is debatable. 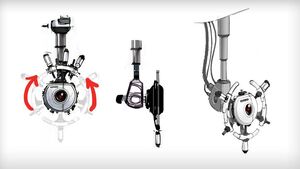 The artwork of AUTO

AUTO fatally electrocutes WALL-E when he refuses to give him the plant.

AUTO furiously spins his wheel and throws the Captain to the floor.

AUTO's defeat.
Add a photo to this gallery 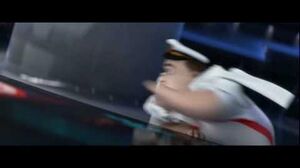 Also See Him On

Retrieved from "https://villains.fandom.com/wiki/AUTO?oldid=3481998"
Community content is available under CC-BY-SA unless otherwise noted.