Owner and CEO of Pharaday
Criminal

Have his father and his colleagues assassinated so he can inherit the company.

Embezzle his company's resources to build himself a cyber-weapon (all succeeded).
Sell his cyber-weapon on the black market.
Convince Villanelle to work for him (all failed).

Aaron Peel is the main antagonist of Series 2 of the TV series Killing Eve, the live-action adaptation on BBC America of the Villanelle novel series written by Luke Jennings. He is a businessman who had his father along with a few others assassinated so that he could inherit the tech-company and sell a cyber-weapon.

He is portrayed by Henry Lloyd-Hughes.

Aaron grew up with a younger sister Amber to their father Alister, who was the owner of tech-company Pharaday, in which Aaron was the heir to. Aaron grew up being intelligent but also paranoid, not having any lovers or friends, and even having people monitor Amber whenever she went to AA meetings. At some point in his life, Aaron started creating videos of arranged deaths, feeling that they satisfy him.

Wanting to expand his potential, Aaron plotted to build a cyber-weapon that would be capable of accessing any information in the would and sell it on the black-market to the highest bidder. Needing access to the Pharaday's resources, Aaron hired an assassin called the Ghost to kill his father and inherit his ownership of the company, making it look like a heart-attack. A few months later, he and Amber were visited by MI6 operatives Eve Polastri and Carolyn Martens, who inform the two of them that their father's death is a murder, wanting to investigate.

Wanting full control and to tie up any loose ends, he also had her kill several others, including his godson Jonathan McVey, the CEO Gerard Lee, his ex-girlfriend Susan Harris and his secretary Linda. During these deaths, he was met by Eve and Jess, who were investigating Alister's death. He arrogantly kept insulting them and was rude during their questioning, especially as he viewed their intelligence services "finished". After having an interview upon gaining control of the company, he had a journalist killed for having a hidden camera. He then created the cyber-weapon and had set up a meeting in Rome.

As Aaron moved ahead with his plan, he met Billie Marie Morgan, whom Amber befriended at her AA meetings and invited over for dinner. Although Billie claimed to be knowledgeable of philosophy, Aaron took a rude disliking to her after asking her questions he knew she didn't know the answer to, and catching her snooping around his trick bookcase. He begins taunting her through dinner and their card game with Amber afterwards. He wonders why someone with two philosophy degrees would be putting on this ditzy act, and tries to call her bluff. After she calls him a bully, she hits him across the face with a philosophy book before leaving.

Although she should normally be angry, Aaron now took a liking to Billie and sent an apology of sorts to her by giving her a philosophy book and inviting her to lunch. At the lunch meeting, he booked the entire restaurant so he could creepily watch Billie eat pasta. He asks her why she befriended his sister, thinking that it is money-related. He then asks how much she likes money and what she spends it on. She complies with his questions and he gives her ticket to his Rome conference that she accepts.

As they arrive in Rome, Aaron not only gave Billie her own room but also had all of the clothes in her luggage replaced with ones of his choice. He also has her room rigged with cameras and microphones to watch her carefully. Aaron then noticed her doing something and suspected her. During his time in Rome, Aaron looked up "Billie Marie Morgan" on every database, only to find nothing on her. Billie arrives out wearing a red dress while wearing a belt over it, which Aaron doesn't approve of and demands her to take off the accessory. He then informs her that she'll be sitting in on dinner, and demands her to be bored during the entirety of the conversation.

During the dinner, Aaron explains the functions of his weapon to the buyers, that it was basically a digital key that can access any information of any person in any database the user chooses. After dinner that night, Aaron and Billie started connecting as he explained that he looked her up only to find nothing on her, having no digital footprint and referring her as a void just like him. She's the only person in the world he knows nothing about, which must be what makes her so interesting.

The next day, Aaron and Billie had breakfast and he revealed to her that he has a new potential buyer named Raymond Algaron, who was meeting him on behalf of the Twelve. A few minutes later, Eve bursts into the room and "Billie" (now revealed to be Villanelle) uses her real Russian accent and reveals that she saw his footage of the murders he arranged, surprising Aaron. He then offers her to work for him and help him make footage of murders just like the ones she saw. Villanelle considers it and Aaron suggests that she starts by killing Eve. Villanelle asks if he wants to watch and he did. However, as she got up with a knife, she slit Aaron's throat and made him watch himself bleed to death. Just as he collapses, he sadistically smiles before bleeding out.

Peel rightfully getting hit in the face by "Billie". 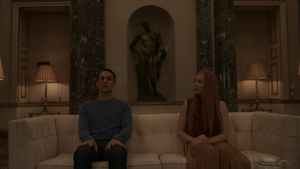 Peel beginning to take an interest in "Billie". 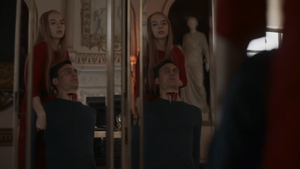 Peel being killed by Villanelle. 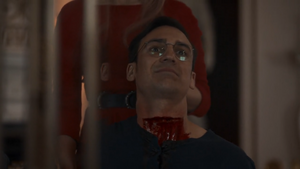 Peel smiling psychotically as he watches himself bleed out.
Add a photo to this gallery

Retrieved from "https://villains.fandom.com/wiki/Aaron_Peel?oldid=3620576"
Community content is available under CC-BY-SA unless otherwise noted.