Spread as much ruin as possible (generally).

Destroy Titus's life by murdering and mutilating his loved ones (largely succeeded).
Escape with his newborn son to train the latter into a warrior (failed, but managed to save his son).

Aaron the Moor is the lover of Tamora and the main antagonist of William Shakespeare's Titus Andronicus. As he is called by Marcus, he is "an irreligious moor, and chief architect and plotter of these woes" (Act V, Scene III).

In terms of the level of his crimes and mere cruelty of character, Aaron ranks as one of, if not the most evil of Shakespeare's villains, rivalled only by Iago and Richard III. Sadistic, treacherous, and filled with rage, Aaron lives only for the misery and ruin he is able to cause for others. He does not care that he has caused Tamora to have an affair that could cost her her life, and has no qualms and no regrets for the misery that he causes Titus and his family, other than that he could not accomplish more. Even when faced with death, Aaron simply laughs and continues to boast about the extremity of his crimes, and enjoys the horrified reactions of others.

However, even Aaron is susceptible to the idea that even evil has standards. While Aaron does not care at all that he has ruined the lives of several people and that people have been raped, murdered, and driven to insanity because of him, (if anything he embraces this), Aaron, even if it is just his own twisted way of pride, truly cared for his son as he defends him to the end, refusing to let any harm come to him ("He dies upon my scimitar's sharp point, that touches this my firstborn son and heir." - Aaron, Act IV, Scene II). However, Aaron does refer to the latter as a "thick-lipped slave", and "slave, looking upon his master", perhaps projecting his own experiences with racism onto the boy. His relationship with his son appears to be not only a deep care for him but also a display of a possible obsession with legacy, as he repeatedly deems his child his heir, his flesh, and most tellingly, himself, figuring on raising it to become a relentless warrior in the woods. Though incredibly twisted, it seemed Aaron had a plan for his child's future, and he displayed no further refusal to be questioned and hanged when he had ascertained his son would live on. He also kills a nurse who makes racist comments and wanting the child to die—though the apparent reason for this is not racial pride, but instead an act of getting rid of any witnesses, as he later kills the midwife (although off-screen) unprovoked.

Aaron is a Moorish Slave to the Roman Empire and the object of Tamora's affections. Ruthless, cold, and brutal, Aaron thrives on the suffering that he is able to cause the other characters in the play, and acts with no motive other than a love for causing misery.

In the opening of the play, Aaron is brought prisoner along with Tamora and her three sons Alarbus, Demetrius, and Chiron. When Titus murders Alarbus as a sacrifice Tamora and her sons plot their revenge. Aaron, who Tamora is having an affair with despite her engagement with Saturninus, thus saving her life uses her newfound power to bring chaos and anarchy.

Aaron overhears Chiron and Demetrius arguing over who should marry Lavinia, daughter to Titus. Always looking for a means to cause misery (and help Tamora and her sons in their plot for revenge against the Andronichi) he convinces them to murder her husband Bassianus and rape her in the woods, which they are all too pleased to do so.

Aaron then forges a note and leads Titus' sons Quintius and Martius to a large hole where the corpse of Bassianus lies, prompting Saturninus to find them guilty. To further rub salt in the wounds, Aaron approaches Titus, who by this point is overcome with despair, and promises him that if Titus chops off his hand, he will save the lives of his two sons. Titus does so, only for Aaron to send for the heads of his two innocent sons to him, leading Titus to became insane with grief.

Nearer the play's climax, Aaron is discussing the matter with Chiron and Demetrius, until a nurse enters with a Blackamoor child, and reveals that Tamora has given birth, and Aaron is the father. While everyone else wants the child killed on account of the shame it would bring to Tamora as well as uncover her affair, Aaron refuses to let the child die, and kills the nurse to save its life, and sends Chiron and Demetrius away, where they ultimately meet their end at the hands of Titus.

In the play's final act, Titus' final living son Lucius (who has raised an army of Goths to combat the corrupt rule of Saturninus and Tamora) comes across Aaron and recognizes him as the villain who ruined Titus' life. Though initially wanting to kill both Aaron and his child die, Aaron persuades Lucius to let the child live a happy life in exchange for a full confession from Aaron. Aaron here reveals all, from the role he played in the rape of Lavinia, the murder of Bassianus, and the trick to get Titus to cut off his hand, and the murder of his two sons. Upon hearing his ghastly confession (and assurance that he is capable of far worse) Lucius is convinced Aaron is too evil to be killed as quickly and painlessly as hanging ("...he must not die so sweet a death as hanging presently." - Lucius, Act V Scene I) and chooses to bury him alive, and let him slowly rot away and starve to death. However, Aaron is unrepentant to the end, regretful only that he could not do more evil in his life ("If one good deed in all my life I did, I do repent it from my very soul." - Aaron, Act V Scene III).

Aaron is constantly referred to by the other characters of the play in derogatory racial slurs on account of his black skin and status as a Moor, being called "irreligious" and "barbarous". While some may argue that Aaron's cause or motive for villainy is the racism he is subject to, an argument that shows credibility on account of his act of killing the nurse for racial slurs ("Zounds, ye whore! Is black so base a hue?" - Aaron, Act IV, Scene II), Aaron himself defies this, and if anything embraces the racism he receives, believing that his black skin should be a cause for evil ("Let fools do good, and fair men call for grace; Aaron will have his soul black like his face." - Aaron, Act III, Scene 1). Thus it could be argued that Aaron may be racist and xenophobic towards himself. 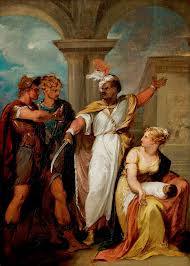 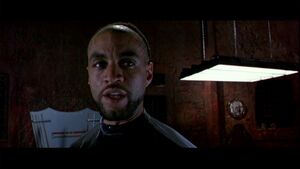 Harry Lennox as Aaron in the 1999 film Titus. 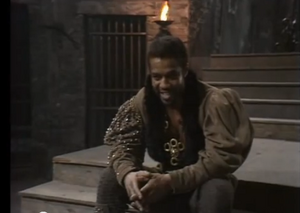 Hugh Quarshire as Aaron in the 1985 BBC production of Titus Andronicus. 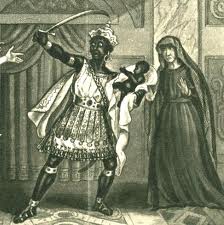 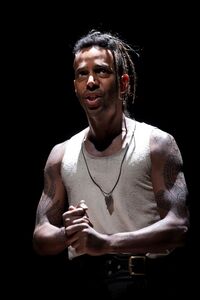 Kevin Harvey as Aaron in the Royal Shakespeare Company production of Titus Andronicus.