Be able to live as a human

The Aartog is the main antagonist of the Dragon Hunters episode "Billy Toughnut". As all Aartogs it dreams of living as a human and shape-shifts into humans in order to do so.

Billy Toughnut, an old friend of Gwizdo and Lian Chu, visits the Snoring Dragon Inn. When he sees his old friends the three embrace and eventually share their life stories. Billy reveals that his village is terrorized by a dragon and the Dragon Hunters decide to accompany Billy back to his village. Arriving at night, they are almost immediately confronted by the dragon.

Lian Chu faces the dragon on the town square, where the two opponents circle each other until Lian Chu engages the beast. However, the Aartog proves to be far too quick and easily evades or dodges Lian Chu's blows. It also shoots spider webs at Lian Chu, missing him but hitting Gwizdo who is pinned to a wall.

After covering the entire village in spider webs, the dragon returns to the woods. The next morning, the Dragon Hunters face the hate of the villagers who do not want strangers in their village.

However, the mayor does not believe that his daughter is a dragon and furiously expels the Dragon Hunters and Billy from the village.

At Billy's house, Lian Chu reveals that the dragon is an Aartog who has captured Gwendolin in order to take her shape. They decide to find the dragon's lair because they expect Gwendolin to be there. Having found the Aartog's cave, the Dragon Hunters head inside and Billy finds Gwendolin captured inside a spider web. They save her and return to the village.

The impostor flees out of the window and returns to the woods, pursued by Lian Chu. In the woods, the Aartog ambushes Lian Chu and transforms into the Dragon Hunter. Both Lian Chu's engage in a sword fight, resulting in the impostor driving Lian Chu over the edge of a cliff. Gwizdo arrives seconds later and, believing the impostor to be the real Lian Chu, walks off to return with him to the village.

Hector however remains and sees the real Lian Chu climb back up the cliff. Together with Hector, Lian Chu warns Gwizdo who runs of as the impostor engages in a sword fight again. The real Lian Chu lunges his sword into the ground, causing the cliff to shatter and the Aartog falls into the abyss, transforming into his true form while dying.

After the dragon's death, Gwizdo rips the contract as he thinks that as a friend Billy should not need to pay them. 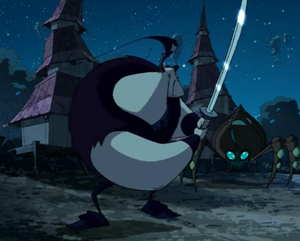 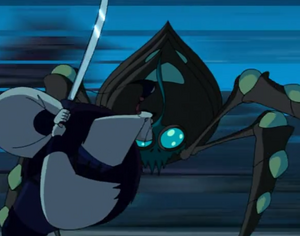 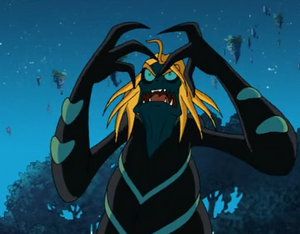 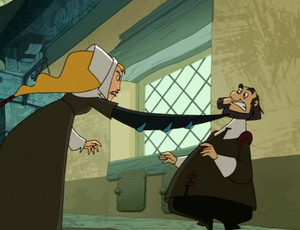 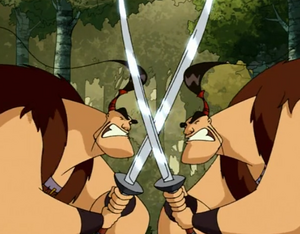 Add a photo to this gallery
Retrieved from "https://villains.fandom.com/wiki/Aartog?oldid=3315387"
Community content is available under CC-BY-SA unless otherwise noted.