Guardian of the Endless Pit

Apollyon the Destroyer
The Dark Destroyer

Protect the Masak Mavdil at any cost (ongoing).

Abaddon is a villain in the DC Comics, specifically appearing in the Demon series.

He was a powerful fallen angel who endlessly circled over Masak Mavdil, the Pit of Hell, where demons banished their own kind. He was a guardian who made sure no one escaped or entered without authority.

Abaddon had guarded the cavernous opening to Masak Mavdil for two thousand years until Etrigan, with vengeful ambition to rule Hell, came seeking his mother who had been banished by Belial when the demon was just a boy. Abaddon was distracted by a flame decoy as Etrigan sneaked into the Pit, and with a slave on his exit. When Etrigan was prepared to launch his assault on the Satanic Triumvirate, he first faced Abaddon in battle to try and gain his support, winning the Destroyer over with a bargain.

Abaddon marched with the army of Etrigan and Ran Va Daath to assault the fortress of Beelzebub and, combining their power, Abaddon and Etrigan razed it to the ground, capturing the Lord of Flies before accepting Lucifer's surrender. At Etrigan's coronation at Masak Mavdil, the new king of Hell announced his triumvirate would consist of his mother and Abaddon. Belial was enraged at the betrayal, and although Abaddon offered to fight his father for him, Etrigan showed Hell his power by consigning Belial to the Pit. 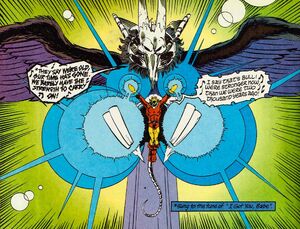 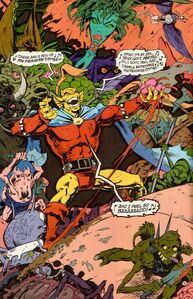 Abaddon (on the top right) under Etrigan's command. 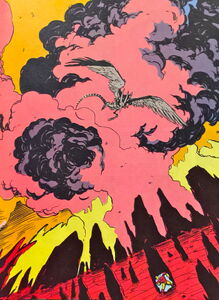