One of the Six Human Gods

Bring destruction and ruin to all of Tyria (failed).

Abaddon is the main antagonist of the first Guild Wars game. He was one of the Six Human Gods who went to war against them after they decided to seal magic way from Tyria and was banished into the Realm of Torment because of that. He then plotted from within the shadows to bring forth the destruction of all of Tyria until he was destroyed Kormir who took his place as one of the Six Human Gods.

Like the rest of the Human Gods, Abaddon came to Tyria from The Mists millennia ago. Though the exact origins of where he came from is unknown, some scholars say that he drew power from an older "Deposed God". It was he who introduced magic to mortals, in order to make them stronger. However, the gift of magic made mortals such as humans turn greedy and power-hungry, and wars raged across Tyria as a result. With humanity on the verge of extinction because of these wars, King Doric, the leader of humanity, traveled to the land of the gods and pleaded for them seal the gift of magic away. The gods agreed, and so they split the bloodstone (the source of all magic in Tyria) into five fragments and sealed them away in a volcano. This act enraged Abaddon, as he didn't want mortals to lose their magic. This resulted in a dispute which later became a full-on battle, which ended with the remaining five gods using their combined powers to seal Abaddon away, in what would later be known as the Realm of Tormant. From his imprisonment, Abaddon plotted from the shadows to break free from his prison and plunge Tyria into ruin. He unleashed the four bloodstone fragments into Tyria, sparking the Guild Wars. He then created the Titans to manipulate the Charr into thinking that they where gods and making them wreak havoc upon humanity, and manipulated Shiro Tagachi into assassinating the emperor sparking chaos in Cantha. However his atrocities did not go unnoticed, as the Sunspears stormed Abaddon's lair and fought him head on. After a long fierce battle, Abaddon was eventually destroyed and his godlly powers where absorbed into Kormir, making her the new god of magic. 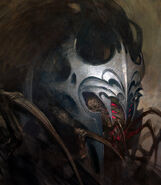 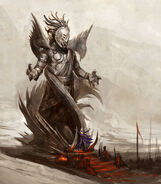