Warmaster of Chaos
Leader of the Black Legion

Blessings of the Chaos Gods
Immense Superhuman strength
Superhuman speed
Enhanced reflexes, resilience and strength
Very high durability
Very high resilience
Very high stamina
Excellent melee prowess
Virtual Immortality (can never truly die until his purpose has been fulfilled)
Can use some psychic powers when calling upon the Powers of Chaos
Immunity to disease and poison
Immune to most forms of manipulation
Immune to fear
Mastery of various tactics
High-intellect
Highly resistant to mortal weapons
Highly resistant to magic and psychic powers
Exceptional leadership skills
Skilled in Daemonancy (Sorcerous art of summoning daemons into real-space)
Countless forces and fleets under his commandment

Deal a fatal final blow to the Emperor in his undying state, Destroy the Imperium and uniting the whole of humanity under the dark banners of Chaos.

Abaddon the Despoiler (also known as Ezekyle Abaddon) is one of the major antagonists in the Warhammer 40,000 franchise. He is the Warmaster of Chaos, former First Captain and now absolute leader of the Black Legion and rumored to be the clone progeny of Warmaster Horus. He is currently the most powerful Warmaster of all, successor to Horus, and blessed by the Chaos Gods. His Warhmmer Fantasy counterpart Is Archaon.

In the most recent assault, Abaddon managed to gain a foothold in the Cadian Gate, although he was unable to consolidate his gains and they have largely been snatched from his grasp by a vicious counterattack from the Imperial Navy. Although his ultimate victory has thus far been prevented, the High Lords of Terra live in fear of the day that Abaddon unites all of the Traitor Legions into an unstoppable horde and returns to play out the last acts of treachery begun by Horus 10,000 years ago. Should Abaddon's armies triumph, the floodgates wull be open and a never ending tide of Chaos will pour out of the Eye of Terror to despoil the Imperium, and perhaps once again strike at the most prized of worlds-Terra.

Abaddon the Despoiler is considered to be one of the strongest characters in the current timeline of 40k and for good reason. He is a near-unmatched warrior of immense superhuman strength and skill who is armed with a deadly arsenal of Chaos artifacts and daemonic weaponry as well as abilities that surpass any astartes/space marine. Any foe he faces in battle or in a duel short of a primarch will always be overpowered and beaten with ease. In times of need he can call upon the powers of chaos. 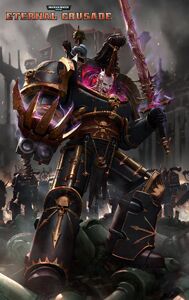 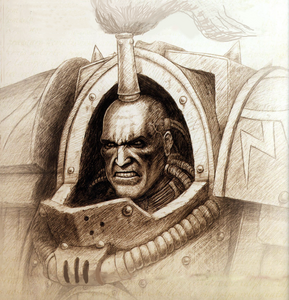 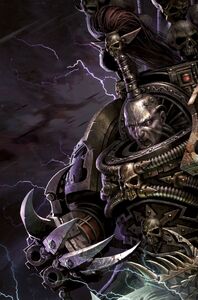 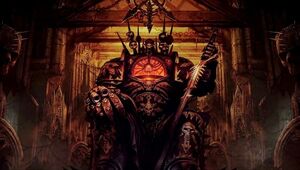 Abaddon in Battlefleet Gothic Armada.
Add a photo to this gallery

Retrieved from "https://villains.fandom.com/wiki/Abaddon_the_Despoiler?oldid=3208058"
Community content is available under CC-BY-SA unless otherwise noted.