Vizier to the Sultan of Africa

Serving to the Sultan.

Vengeful Servant
Aban-Khan is the main antagonist of the 1975 American-Hungarian animated film Hugo the Hippo. He is the wicked adviser to the Sultan of Africa.

He was voiced by the late Paul Lynde (who also voiced The Hooded Claw from The Perils of Penelope Pitstop) in the English version, and by Tamás Major in the Hungarian version. 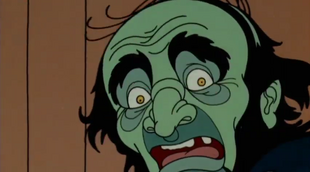 Aban-Khan's despair, as he gets shamed by the mob at court.