Commander of the Nile River Coalition

Maintain his control over the Nile River (succeeded for a while)

General Abasi Hakim is a minor antagonist in the 2015 video game Call of Duty: Black Ops III, appearing in the mission "Lotus Towers". He is the president of Sudan and one of the commanders of the Nile River Coalition, a political union that seeks to take control of the Nile River in order to control all of its invaluable resources.

He was voiced by Faran Tahir in motion capture, who also played Raza in Iron Man.

In 2022, the NRC was established as a trading union between Ethiopia and South Sudan. In 2024, Abasi Hakim brought the rest of Sudan into the NRC, which profited by placing high taxation on trading water, which had become a valuable resource due to worldwide water shortages caused by global warming. Hakim and the rest of the NRC later began a plan to place dams along the section of the River Nile that ran through their territory, alarming both the Winslow Accords, who claimed it was a breach of the Helsinki Rules, and the Egyptian government, who realized that this would cut off water supplies to Egypt and cause a drought. However, the NRC were unable to bring this plan to fruition due to lack of funding.

In 2039, Kenya, which had been a member of the NRC since 2030, discovered Rare earth elements in their territory, allowing them to begin trading with the Common Defense Pact. This allowed the NRC to get the funding they needed, and they began to dam the Nile, causing the deaths of many Egyptians via droughts. As a result, Egypt declared war on the NRC, leading to a protracted conflict between the two sides, fueled by the CDP and the Winslow Accords. Ultimately, the NRC managed to take Cairo, but the war still continued.

In order to destabilize the NRC's hold on Egypt, Winslow Accords agents John Taylor and Jacob Hendricks initiated an uprising against the NRC by attacking a group of riot troopers, causing the citizens of Cairo to start attacking the NRC as well. In order to quell the uprising, Hakim began addressing the citizens of Cairo from the balcony of Lotus Towers, but was attacked by Taylor, who threw him from the balcony to his death, further provoking the uprising.

General Hakim appears in the simulation created by Corvus to learn of its origins from Taylor's memories, and used the Player to go back to the uprising against Hakim and the NRC. 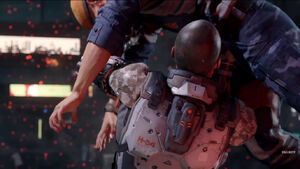 Hakim's corpse being picked up and lifted by the Player.