Abby is a vampire and the main character of the 2010 film Let Me In. She is more or less a villain, or more of an anti-hero in the film.

She was portrayed by Chloe Grace Moretz, who also played Carrie White in the 2013 Carrie remake film.

﻿In the 2010 film Let Me In, Abby is under the care of her "Father", and meets a bullied boy named Owen and befriends him after she moves to his town and right next door. As a Vampire, Abby needs blood to survive and has her 'Father' kill for her so she can have blood. In his first murder, he spills the blood he collects for her, and, enraged, Abby leaves and hides under a highway. A passerby jogger sees her, and, concerned, approaches Abby to help her. But as he picks her up on Abby's request when she claimed she was injured, she attacks him and wrestles him to the ground, where she begins to feed off of him. After she has her fill, Abby flees the scene and is seen then talking with Owen, who accidentally cuts himself.

As his blood drips onto the floor, Abby licks it up and looks at Owen, mustering the strength not to attack him and merely run out of the room, climb a tree, and then leap on a woman walking her dog. She attacks her and rips into her throat before she is chased off by a nearby man; this lands the woman in the hospital who turns into a Vampire, feeds on herself, and is burned by the sunlight from the hospital room window. After this, Owen asks Abby if she was a Vampire, and she tells him that she needs blood to live; a yes. Despite this, Owen remains friends with her. Soon, Abby arrives at Owen's home, and tells him he has to invite her in. He asks why, and she enters anyway, only to tremble and begin bleeding from head to toe.

Shocked and horrified for Abby, Owen tells her she can come in, and Abby stops bleeding. Near the end of the film, a Detective breaks into Abby's home, when Abby is sleeping in a dark room, as the windows are covered with duck tape to prevent the sunlight from harming her. Owen hides as the Detective enters the room where Abby's in and uncovers her, still sleeping. But as he begins to take off the duck tape from the window, a small stream of sunlight gets in and touches Abby, causing her to awaken as her skin begins to crack.

Owen shouts at him, and the Detective stops and turns to look at him, but Abby then leaps onto his back, attacking him and dragging him into the room as she leaves a trail of blood behind. Owen closes the door to the room as she begins to feed off of him, and moments later, Abby gets out of the room and hugs Owen, her white dress splattered in blood and her mouth drenched in it.

At the end of the film, the sounds of a flying creature-like Abby is heard when Owen is drowning in a pool, and Abby saves Owen from drowning by killing the boys that bullied him and caused him to nearly drown in a pool along with other people in the area, and is then last shown to be in a trunk on a train with Owen as they tap out brief messages to each other in Morse Code as the film ends.

Abby appears alongside her "Father" in Let Me In: Crossroads, a comic book prequel series by Dark Horse Comics, the same ones who created the Buffy The Vampire Slayer comics. It tells the story of The Father, which is named Thomas, and Abby as they fight off a real-estate tycoon who is after their home. 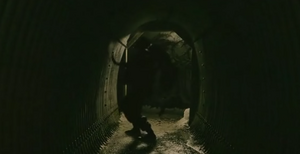 Abby kills one of her victims.

Abby begins to sweat blood as a reaction to coming in without being invited.

Owen invites Abby in to stop her from bleeding.
Add a photo to this gallery
Retrieved from "https://villains.fandom.com/wiki/Abby_(Let_Me_In)?oldid=3475414"
Community content is available under CC-BY-SA unless otherwise noted.