Abdul Alhazred is a prominent figure in the Lovecraftian mythology and has been frequently described as "The Mad Arab" or similar due to his dealings with forbidden magic and the dreaded Great Old Ones. He is most well-known for writing the infamous Necronomicon.

Arabic male of undetermined age. He lived at or around the 7th-8th century AD and is the author of the infamous Necronomicon, a book of magic so evil that it invariably drives the users totally, irredeemably insane. The book is variously ascribed as covering aspects of necromancy or demonology and could be said to cover both. He was known to worship Cthulhu and Yog-Sothoth.

Abdul Alhazred died at an unknown date when, while walking through a marketplace somewhere in the Middle East, he was ripped to shreds by invisible demons after being lifted into the air by said demons.

Abdul Alhazred is a highly accomplished sorcerer due to his intense study in magic. The true extent of his powers are but unknown. 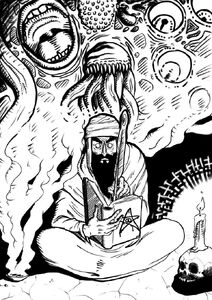 The Mad Arab aka Abdul Alhazred. 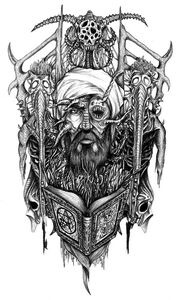