Villains Wiki
Register
Don't have an account?
Sign In
Advertisement
in: Evil from the Past, Force of Nature, Star Wars Villains,
and 71 more

Fate of the Jedi: Abyss

Member of the Ones (formerly)

Trying to corrupt Luke Skywalker.Making people hurt each other.

Escape from her prison (succeeded).
Become GA Chief of State (temporarily succeeded)
Destroy civilization and start a new order in her image.
Recreate the family of the Ones through Ben Skywalker and Vestara Khai (both failed).

Abeloth, also known as the Bringer of Chaos, is one of main antagonists (alongside Natasi Daala) in the Star Wars Expanded Universe/Legends series Fate of the Jedi.

She was part of the Ones, a family of powerful Force-wielders featured in The Clone Wars TV series. She was mortal, unlike her "family", and in an attempt to hold onto the life she so loved, she did the forbidden - she drank from the Font of Power and bathed in the Pool of Knowledge. Her actions corrupted her, transforming her into the twisted, immortal entity known as Abeloth.

Abeloth is not seen at first, but her influence manifests itself in the form of madness affecting young Jedi Knights. For Luke Skywalker, this comes at the worst possible time: 2.5 years have passed since his late nephew, Jacen Solo, wrought havoc as the Sith Lord Darth Caedus during a brief, but violent and catastrophic civil war, and ties between Luke's Jedi Order and the government are at a low point. After the current head-of-state, former Imperial Admiral Natasi Daala, exiles Luke, he travels with his son Ben to find out why Jacen turned to the dark side. This leads them on a quest that brings them into alliance, and later conflict, with a "Lost Tribe of Sith" and ultimately Abeloth herself.

Abeloth proves to be no run-of-the-mill adversary, able to use avatar bodies to disguise herself and stave off death. She takes control of the Lost Tribe and later the Galactic Alliance, then flees back to her homeworld after being discovered. At the end of the series, Luke confronts Abeloth in a metaphysical battle alongside a mysterious Sith Lord named Darth Krayt. During the fight, Luke's allies destroy all of her remaining avatars almost simultaneously, allowing Luke to finish her off. Just in case, Luke sends a group of Jedi to find the magical Dagger of Mortis so that Abeloth, should she ever show her face again, can be killed once and for all. 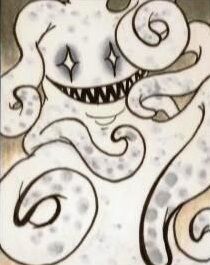