Force his subjects to worship him.

Abhartach was a villain in Irish mythology who is believed to have provided the inspiration for Count Dracula several centuries later.

According to the story, Abhartach was an immensely evil Celtic chieftain who practiced dark magic and constantly oppressed and killed his subjects for fun. Eventually, he was slain by a rival tribe and buried in a standing posture, as was the custom back then. However, Abhartach's black magic allowed him to return as a neamh-mairbh (walking dead) and demanded that his subjects sacrifice others to him and allow him to freely feast on their blood. His subjects constantly slew him, but he always returned to life thanks to his magic. Eventually, his subjects submitted to him, and began making blood sacrifices to him.

However, at one point the Celtic hero Cathain heard of Abhartach's tyranny, and consulted a Druid, who gave him a sword made of yew wood that would prevent Abhartach from rising again when killed. Cathain killed him with the sword, and Abhartach was buried upside-down with a large stone placed on top of his grave to prevent him from escaping in case he did rise again. 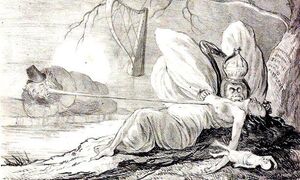 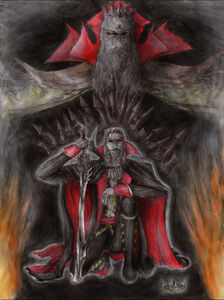 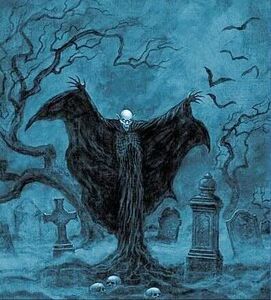