Abidos the Third is an antagonist from the first season of Yu-Gi-Oh! GX. A member of the Shadow Riders, he uses a "Servants of the Pharaoh" Deck, with Monster Cards which greatly resemble his own servants.

He was voiced by Mamoru Miyano (who also voices D in Zyuden Sentai Kyoryuger) in Japanese and Darren Dunstan in English.

Abidos the Third is an ancient pharaoh who has never lost a duel in his life.

He regained his human body by the powers of his Shadow Charm, the Shadow Headband. He then became one of the Shadow Riders, and with his army of mummies, he abducted the "Keykeepers" to his flying ship in order to duel them and take their spirit keys.

While dueling Jaden Yuki, he realizes that he had never lost a duel because he only dueled his underlings. They were simply too scared of him, so they would always let them win, just because he was a pharaoh.

Jaden defeats him quite easily, and Abidos realizes what a real duel is like. He accepts his loss and gives his Shadow Charm to Jaden. He then leaves for the afterlife. 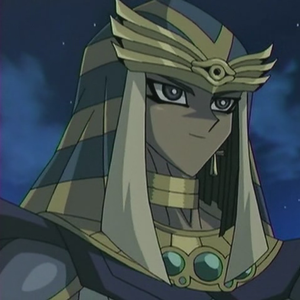