Going on adventures to find treasure.


Use Loretta to help him find the treasures of The Lost City.
Chase Loretta and Alan and kill them for getting in his way (both failed).

Abigail Fairfax is the main antagonist of the 2022 action-adventure film The Lost City. He is an egotistical, "eccentric billionaire" character who seeks to find the treasure of The Lost City.

He was portrayed by Daniel Radcliffe who also played Walter Mabry in Now You See Me 2.

The best way to describe Fairfax is an egotist. His father handed the business empire to his younger brother which likely made him the way he is today. He is an egotistical, manipulative, and sadistic megalomaniac who hunts for the Crown of Fire and will stop at nothing to get what he wants, even if it means harming others who get in his way.

For his part, Fairfax seems to fancy himself as a modern-day version of the Victorian-era archetypical "gentlemen adventurer", a dashing, intrepid, independently wealthy private explorer who is obsessed with the historic artifacts, documents, and monuments of lost civilizations, while seemingly being completely oblivious to the fact he is viewed as joke even by his own men, to say nothing of the public at large, all of his efforts at independent exploration and archaeology being largely unsuccessful and ridiculed by almost everyone, and his obsession with historic treasures being for entirely selfish reasons.

It is implied however he is aware of his reputation as a wannabe and laughing stock and of his failure-ridden lack of success in his archeological and exploratory endeavors. This of course drives him to take increasingly ruthless and desperate actions , pressing on and doubling down in his efforts to prove himself worthy to the world at large by making himself a genuine example of the bold explorer archetype he so desperately wants himself to be.

Powers and and Abilities

Abigail Fairfax is seen as a joke by most people and, despite seeming to live up to his buffoonish reputation at first glance he is actually surprisingly more competent than he first appears to be. Admittedly, he is possessed of a genuinely eccentric, immature and childish personality, and is every bit the entitled, over-privileged wealthy youth he looks like. However, despite his emotionally stunted personality and overprivileged behavior he does indeed have some legitimate skill and talent in the areas of expertise required to succeed in the very dangerous and sophisticated pursuits he involves himself in, namely proficiency in financing and resourcing large scale operations, archaeological and academic research, adventuring and exploration, commanding and motivating men, handgun marksmanship and criminal maneuvering.

In spite of being passed over for his family's fortune, he did manage to secure and maintain immense resources to fund and supply his treasure hunting endeavors. a difficult feat considering the scope of his operations.

He also has some genuine skill with archeology and research, as he was able to find various artifacts and references to help in his search for lost treasures, though he is not as capable as a well-educated specialist regarding specific cultures like Loretta, hence his kidnapping of her.

References by characters also imply he is relatively experienced overall as an private explorer with many endeavors under his belt. This includes searching for the lost treasure of Montezuma which he documented by video logging and a well publicized effort to raise the Titanic. Of course this does nothing to prevent the public from seeing him as a joke, he does have some level of experience nonetheless.

Also, despite all of his goons being mercenaries motivated by money, Fairfax, logically speaking must have some degree of skill and charisma to motivate them, and to some extent, to lead and direct them.

Surprisingly, when not surrounded by his soldiers, Fairfax is not completely helpless and actually has some personal proficiency for handguns despite presumably lacking the professional training of his henchmen , as shown in the final act, though in those particular instances his amateur talent is marred by his increasingly unstable emotional state. (though it should be highlighted that, while an okay marksman he lacks any kind of skill in hand to hand combat which later proves his undoing)

He also displays strategic cunning and extreme paranoid preparedness befitting of a true criminal mastermind, shown when he preemptively corrupts and suborns the island's police force in anticipation of Loretta and Alan's attempts to turn to the local authorities for assistance, to say nothing of the forethought in building and maintaining a highly fortified highly militarized compound around the archeological site complete with a literal army of security personnel with the vehicles, weapons, and equipment to match, all in case he runs into any kind of trouble. Fairfax himself alludes to meticulous preparing and planning months in advance before the kidnapping and the start of his current hunt.

Overall, he is a capable, dangerous threat as a villain provided he is at the helm of his army of henchman, equipment, vehicles and other assets of his support network. Of course, this also constitutes his achilles' heel: as a man of power, wealth and privilege he is unaccustomed to operating on his own, his amateur proficiency with firearms notwithstanding, when weaponless and completely separated from his network of resources, assets, and money, he is easily subdued and captured in short order.

Abigail Fairfax is a billionaire who wants to use Loretta to find the hidden treasures of the Lost City, he finds Loretta at her book tour of her new book The Lost City of D. Fairfax finds out that Loretta's books are based off of academic research that her dead archaeologist husband had done. Fairfax is convinced after discovering a lost city on an Atlantic Island that this is where he can find the Crown of Fire. When Loretta declines his offer to helping him translate an ancient map that could help him find the treasure he kidnaps Loretta and takes her to the island on a jet by drugging her. His reason for doing this is because he thinks the island might be destroyed by an active volcano.

Alan watches Loretta getting kidnapped and recruits a rescue team to find Loretta. Jack breaks into the compound Fairfax owns and manages to free Loretta, but is then shot in the head before they can escape to the airport. This action causes Loretta and Alan to escape to the jungle.

After a day of Loretta and Alan fighting off Fairfax's goons, they find a nearby village and discover that the crown is hidden in a sinkhole. Fairfax kidnaps Loretta again, sparking a chase by Alan in order to save Loretta. The duo are forced to give him the details of where the treasure is located. When they arrive at the location they discover that the tomb isn't a monument for Kalaman's power, but it is actually a hiding place for the queen to grieve for her husband. The Crown of Fire was made of red seashells which were gathered by her husband whom she was buried with. The treasure was actually just inseparable love by the king and queen, but Fairfax was enraged that he wasted all that money a treasure hunt for nothing, he orders Loretta and Alan into a tomb, threatens to shoot them both if they don’t, as the volcano was erupting. One of his goons betrays Fairfax, having enough of his cruel actions and left a crowbar for the duo to escape before he abandons Fairfax on an island. Beth arrives with a coast guard, seeing Fajrfax on the island as he pretends to be innocent and that he doesn’t know Loretta and Alan.

But eventually Loretta and Alan escaped from the temple using the tunnel underwater, as Beth sees them in the water, happy that they survived, as Loretta and Alan yell out to her that guy they saved Fairfax is the one who kidnapped her, killed Jack and left them to die in the temple. Exposed Fairfax foolishly attempted to get away only to be caught all too easily since he was on a boat, and is then arrested for his crimes. 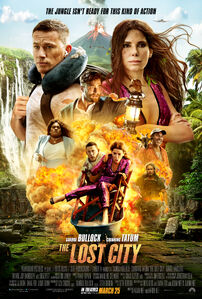 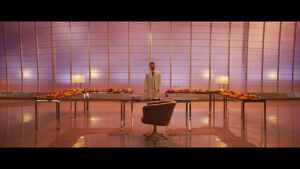 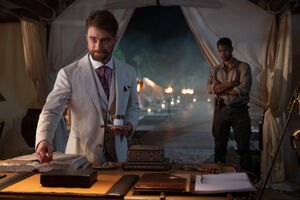 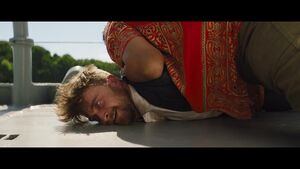