Accusing and killing people with psychic/spiritual powers as "witches".

Killing anyone or anything that gets in her way.
Tolling the bell in the city of Salem as the Bell Killings begun.

Successfully continue her curse by "cleansing" every "witch" in the city of Salem.

Kill Detectve Ronan O'Connor for interfering (all succeeded).
Prevent Ronan's spirit from sending her to hell for her heinous crimes (failed).

Abigail Williams is the main antagonist of the 2014 supernatural adventure stealth videogame Murdered: Soul Suspect. She is a little girl found in the ghostly realm of Dusk who watches Detective Ronan O'Connor who later discovers that she perpetrated his death and she is behind the Bell Killer murders within the present day American town of Salem. She was interrogated at the very end of the game, and gives Ronan several clues.

She was voiced by Laura Nicole Harrison.

Abigail Williams was a child at the time of the Salem Witch Trials. Although is unclear if she had some sort of spiritual powers when alive, it is implied that she may have been an actual witch during her life time, whether or not she knew it.

At the time, for some reason not explained in game, it seems the authorities greatly relied on her accusations over people who supposedly practiced witchcraft. Aware of this, her cruel father used it to his own advantage, forcing her - even tortured her by dunking drowning - to regard his personal enemies as witches and report them. As result she became obsessed in persecuting witches. Eventually, the authorities growing afraid of the traumatized girl, took her on to custody, nearly the end of Witch Trials period.

In 1692 A.D., the local Massachusetts government extinguished the Witch Trials and ordered the release of all people accused of witchcraft. However, the judge of the district of Salem concluded that even under pressure and torturing, the young Abigail would never give up on her persecution against of what she believes as being witches. Afraid of what the girl were capable of doing if released, the judge ordered her death.

A year later in that same era, before she was escorted off her cell in direction of the gallows pole, Abigail carved a symbol of a bell on the floor of the cell and cursed the city through it, promising to "cleanse" the town of all "witches", even if takes an entire eternity to do it.

Abigail serves as the story's main antagonist under the guise of the "Bell Killer". The Bell Killer was a figure she created by possessing members of the police force such as Baxter, Rex, and Ronan O'Connor, and using them to murder psychic mediums, whom Abigail perceived as being 'witches' and believing that they had contracts with demons.

Eventually, Ronan finds Rex, possessed by Abigail, trying to hang Joy at the gallows in the museum. With help from Joy, who is also a psychic medium, the two are able to banish Abigail from Rex's body and her ghost is confronted by Ronan's. While in a state of shock from finding out the truth behind his death, Abigail tries to have Ronan consumed by the demons through a pit she summons in the floor. However, Ronan escapes their grasp and instead the demons pull Abigail in, expelling her soul from the mortal world and into hell for eternity, and consequently ending the Bell Killings.

Abigail is a malicious, insane, unreasonable, sadistic, clever, evil-minded, methodical, and falsely friendly ghost, who wishes to eradicate all "witches" from the town of Salem, even in the afterlife.

Driven completely mad and obsessed by her father, Abigail is an extremely delusional spirit with long memories who actively believe to be good and do the right and necessary things, no matters how many innocents she is going to kill. Hating dark sorcery, she vowed to cleanse the town of Salem of every of its witches, and will never give up this goal even in the afterlife. As such, she is willing to commit many murders in the sake of religion, including anyone who stand in her way, like the two museum guards. Such attitude lead to hypocrisy as she is herself sort of a witch, and became mere dark energy once dead.

Abigail Williams has the ability to possess just like any other Ghosts, but her power is apparently either more developed or unique. It gives inhuman physical strength and endurance to the host body she possesses, and she can control all the person's actions at will, without them having any recollection of the events.

She also has the common spirit ability to see flashbacks of peoples past memories, and has the unique ability to evoke Ghosts from the ground. 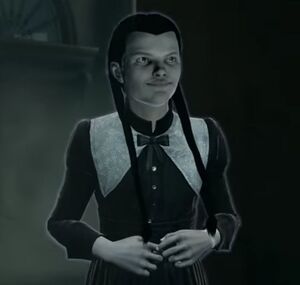